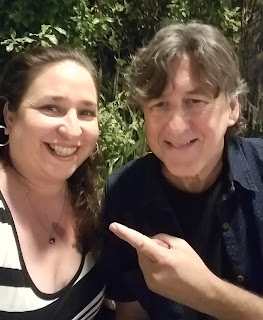 I think I've been really over-committing to things lately and it's totally caught up with me in that besides some work and meetings, I intend to leave my house as little as possible this week. Last week started with Jeff taking me to see "Almost Famous: The Musical" at the Old Globe and it was phenomenal, but it closed out this week with complete sell outs, so I didn't feel any urgency to review it at the end of the run. On Wednesday Darren and I went to the Observatory for Caravan Palace and had a chill time since my photo pass had fallen through. I didn't get any magical responses to Lizzo on Thursday either, which was fine by me, but I got called to work at Music Box on Friday for Queen Nation and worked on Saturday for Har Mar Superstar's new project, Heart Bones. But the whole week I've had that tickle in my throat and lungs and besides a couple hours at the Zoo on Sunday night, I'm down for the count, trying to rest, drink all the fluids, and rest some more. There are shows I'd love to see this week, but besides working at the Casbah on Wednesday, don't expect to see me anywhere. It's almost as my subconscious knows how much I despise Halloween. But if you're not scrooge mcscroogey like me, I hope everyone has a fun and safe week. Full listings after the jump.