You probably missed seeing Innerds at the Casbah last Tuesday. Too bad. Frenetic tapping and intricate riffs. More photos after the jump. Check my blog post on the show at www.seemichaeslphotos.com, with a totally off the subject essay on the origins of Bebop. 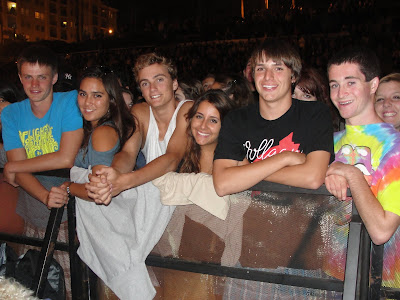 Last year I took a ton of photos at the Fm 94/9 Independence Jam and I seriously don't think I ever got around to posting them. Sometimes I plan on writing a ton and it just doesn't happen. So instead, I'm gonna just post the photos and wipe my hands clean of it.

I promised these kids that their photo would be the first one posted. They were such troopers. They were in the front the entire day, engaged with every band, and were SO excited to be there. While I take it for granted that I've seen every band on the bill before (some of them several times) I forget how much it sucks to be locked out of so many shows when you're under 21, so even though these bands come through town, this was the first chance to see them for a lot of the kids there. This made the final act, Edward Sharpe & The Magnetic Zeros, feel like a religious experience when watching the band through the eyes of kids seeing them for the first time. I took a lot of photos but I don't need to overwhelm you with most of them. Click 'keep on reading' for more.

My day started with Tim Pyles picking me up a little after 1. We had to swing by the station for a minute and headed north. Neither of us had eaten, and since he's never been to Hensley's, we stopped in. I had their cheesesteak which was super tasty, but had we known the BBQ would be in full swing at the Casbah stage, we probably should've just waited till we got to the venue because that carne asada looked tasty. No biggie though....when we arrived, Delta Spirit was finishing up their sound check and doors opened about half an hour later.

The mannequins were part of The Burning of Rome's stage props, but White Apple Tree kicked off the day with a fun set of their 80s inspired synth heavy dance rock.

My day pretty much consisted of drinking a beer, shooting photos for the first part of any given band's set, then jumping to the next stage to prepare for more photos. It has been a long time since I've seen Delta Spirit, and my first time since their latest album dropped, and I really love hearing them perform.

I checked out the VIP area briefly, but it's mostly station clients and I didn't really know anyone up there, so I ventured back to the Casbah stage for The Burning of Rome. The band certainly knows how to entertain a crowd and I love the format of bouncing between stages because it gives the crowd a chance to see local bands they might not be familiar with. The Burning of Rome is from Oceanside, however, so there were plenty of friends and fans there singing along with every word. The band just signed to Surf Dog Records, so I suspect you'll be hearing a lot more from the band in the months to come.

Back to the mainstage and The Whigs gave another rousing performance. The Athens, Georgia band was last here at the Belly Up and I guess they really love San Diego. Apparently on Monday, they shot a music video at the Whistle Stop. Sweet!

Back on the local stage, The Nervous Wreckords were gearing up to play. Nick Venti (Republic of Letters) is the official drummer these days, and we all had a good time shooting the shit backstage before they started. TNW have fast catchy songs that are perfect for an outdoor stage, and with the gorgeous ladies in the group, they not only sound great, but they are fun to shoot.

As the sun began to set in Oceanside, Rogue Wave took to the mainstage. Unfortunately, this is when my equipment is lacking and for all the photos I took, I know the photos just aren't that great. Still, it was fun being up front for a band whose music is so irresistable.

As I wandered back to the local stage, I took in the view from the top of the amphitheatre and then bumped into Ryan from White Apple Tree with his mom and sister. For Silent Comedy I was in an ideal spot, standing on the wing of the stage, but my camera does not like LED lighting whatsoever, so you'll have to check out the videos and forgive my images. The band certainly had a huge crowd and they always bring their A-game to every show, rocking out like it's their last show ever. It was a bit bittersweet as it was Ian's last show with the band, but they'll carry on and continue to rock out and represent San Diego.

Finally it was time to head back to the mainstage for Edward Sharpe & The Magnetic Zeros. The crowd was so into the band and it was exciting to see Alex vibing off the crowd's energy, jumping onto the railing several times. It felt like every person there knew every word and with 4200+ people in attendance, it was hard not to get caught up in the moment.

Nearing the end of the night, I made my way to the hotel where Tim Pyles was finishing up his live broadcast. The Nervous Wreckords dropped in for a minute but eventually it was time to call it a night. It had been an awesome day and I loved every second of it. And of course there are no breaks with music...there are tons of great shows and events happening...I hope to see everyone at the San Diego Music Awards on September 12 where we'll do it all over again.
Posted by Rosemary Bystrak at Tuesday, August 31, 2010 0 comments