Ownership changes in the bar industy are nothing new, but they seem to come in waves. It feels like it wasn't long ago that I was writing about Scolari's changing to The Office, or the Zombie Lounge becoming the Radio Room or Soda Bar taking over Chaser's. It seems that this will be a constant...some bars find a formula for success and endure tough economic times, other brave entrepreneurs have to get out while they still can recover their investments, and still other owners just decide their bar owning days are behind them and retire out of the biz. 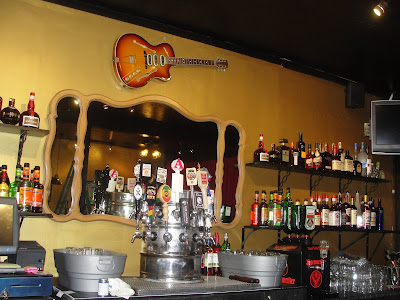 This summer, there are three bars that are finding new life. I've already talked about Eleven, the bar that was formerly the Radio Room (and The Zombie Lounge not long before that). Scott Blair, the owner of Hamilton's and Small Bar has taken over the spot with partner Dennis Borlek to turn the spot into another great beer destination for San Diego. Louis Mello, former Liar's Club owner, is manning the ship and has already proven that the spot will be a destination. We had a very successful showcase there during the North Park Music Thing, and on Thursday night, the bar was at capacity for their "official" opening party with The Donkeys and The Silent Comedy. The bar will generally host music on Fridays and Saturdays, limiting their lineups to two bands a night. With these guys, the focus is on good beer and a kick ass jukebox. Nothing more. Nothing less. (oh, and peanuts, though I'll never feel right throwing shit on the ground). Visit Eleven at 3519 El Cajon Blvd.

Another bar will be finding new life as The Shakedown(With a great SD logo to match). What was once known as The Rhythm Lounge, the bar located in the Midway district near the Sports Arena has long struggled with being lost among titty bars and XXX superstores. (Remnant signs still inside the bar warn about people who bring in their own booze or have sex in the bathroom). The bar is currently being remodeled and renovated. Ted, the new owner, has been living in LA for the past 7 years learning the ins and outs of bars, entertainment, and marketing and thinks that with his partners, he can offer a spot for true rock n roll and punk rock in San Diego. Think old cars, choppers, punk rock and tattoos and you have some idea what they're shooting for. Dave from The Queers is one of those partners and on a recent afternoon, all hands were on deck painting and starting the process of renovating the stage for better live performances. I can't say I ever went to The Rhythm Lounge, but after talking with the guys and realizing that I knew Ted before he moved, when we both frequented places like the Ken Club, The Tower Bar, Scolari's, etc., I'm sure that The Shake Down will have no problem finding their niche crowd, with rock n roll DJs most nights and shows only when there's a bill worthy of hosting. Find the bar at 3048 Midway Drive. They expect to be open on September 1st, with at least one show already scheduled for September 10 with Social Spit, Neverland Ranch Hands, The Last Years and more. (The bar wasn't quite photo ready, but I expect to be back before the opening) (Update: there is also a show on 9/4, the opening weekend, feat. The Experiments, Strangely Strange and Punk Rock DJs) 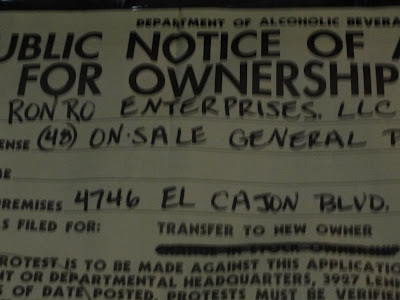 And finally, what started as a not-for-blogging scoop earlier this week was confirmed last night while I was at the Beauty Bar. The bar has been sold to "Ron Ro Enterprises", which is a partnership with Mick (Tower Bar) and Thaddeus Robles (bartender extraordinaire at Livewire, Casbah, etc.).

Mick confirmed that the bar will take the name of the bar that once stood in the same location, Til Two. "We made a Facebook page today, so I guess it's public knowledge now!," Mick said in his mischievous accent. "Ron Ro" will take over the bar officially on October 1st. I asked if the bar will have a new look, and Mick was a bit coy. He likes it as it is, he says, but he'll probably add 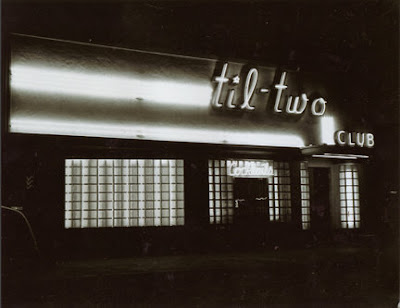 some booths in the front bar area, and of course change some of the Beauty Bar signature silhouette signage. He likes the outdoor stage and thinks that changes will be gradual instead of a shut-down/full bar makeover. Judging by classic photos of Til Two, it appears that the aesthetic will feel old school and laid back, and knowing Mick for a few years now, I know that the bar is in good hands. He's never had a shortage of bands that want to play at the Tower Bar (even when an entertainment license was in question) and his kind demeanor has always been appreciated. He makes you feel like you're a prized customer whether you see him daily or just twice a year. It will be sad to say goodbye to the Beauty Bar in San Diego, but I look forward to the next chapter forward, which appears to be a nod to the bar's past. Check out Til Two when it opens on or around October 1 at 4746 El Cajon Blvd.
Posted by Rosemary Bystrak at Friday, August 27, 2010