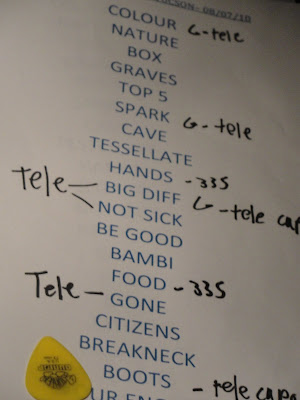 I don't have a ton to say about the Tokyo Police Club show at the Casbah. It was fantastic, they brought their own really cool lights, and the show was sold out...I got there right as the openers, The Arkells, started, and they were awesome, energetic, and kept the crowd interested. In fact, it seemed nobody was gonna appreciate me squeezing in, nor did I want to wait up front for the whole show because I had a few friends I wanted to catch up with, so I decided to chill out and skip the photos and videos this time around. Instead, I opted to hang out on the side and just watch the entire show. I did manage to take a couple far away photos of Tokyo Police Club and got this of the setlist. I don't know how closely they followed it, seeing as it said Tucson at the top, but perhaps they stuck to it generally.

Singer Dave Monk mentioned that they had an awesome day in San Diego. They played an acoustic show at Dog Beach (which I found out about too late to post) and enjoyed our town, which made it funny later on, during 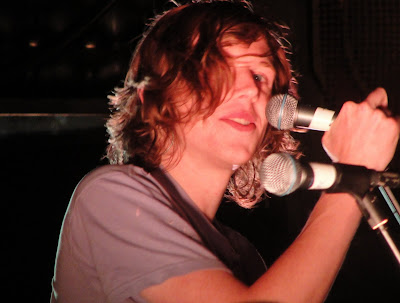 the encore, when Dave thanked San Francisco. Immediately realizing his error, he let out a giant "FUUUUUUUCCCCCKKKK!!" and begged forgiveness and everyone was laughing it off. "I even wrote it on the back of my guitar so I wouldn't mess it up!!" He was cute about it and I don't think anyone cared except for the guy from the opening band who mockingly heckled him.

I know these pics aren't great by any stretch, but considering I was sitting on the ledge next to the coffee pot, I'd say they're a good representation of the killer lighting they brought. I think the picture below might be my favorite photo I've ever taken in theory, because the guitarist was furiously hitting his tambourine and somehow I managed to get Dave peeking through...though I realize it looks like he's being eaten by a jellyfish.

Anyhow, super fun night and nice bumping into friends unexpectedly. I hope before the end of the day that I can get some Temper Trap and SSPU photos up, but I took so many and they take forever to sort through and upload. By the way, I'm currently using photobucket, but has anyone tried numerous photo sites and decided on a best option? I've used Picasa, Flickr, and Photobucket, but haven't tried them in years...maybe they're better now? Any input that would help me to better use my time would be appreciated. 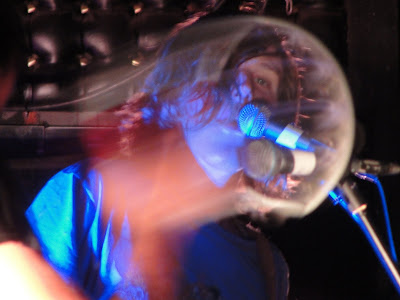