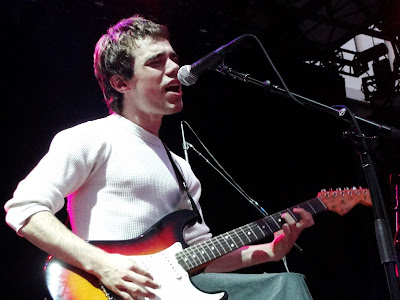 I know I'm months behind when it comes to photos, but sometimes, like tonight, there's this crazy thing...I'm such an amateur photographer and I'm constantly chided for not having a "real" camera, yet I was the only one in the photo pit for Avi Buffalo, and then during My Morning Jacket there was only one other photographer...so besides all the people shooting photos from the crowd, I was quite privileged to have an up close view of the show. Sometimes I will stand right in front of a speaker just to hear the music closer than anyone else, and take pictures just so I don't look like such a fangirl.

I have to say I have a certain affection for Avi. I know he's been a big deal in LA for a while, but it still makes me especially happy to know that he's signed to SubPop. I recommended him for last year's North Park Music Thing. His career was already on a trajectory for success, but just how well the band is doing is really impressive. Immediately after the show, Sezio announced that the next time we'll get to enjoy Avi Buffalo will be Sunday, November 7 at Sushi Art. Save the date.
Here are some of my shots of Avi Buffalo: 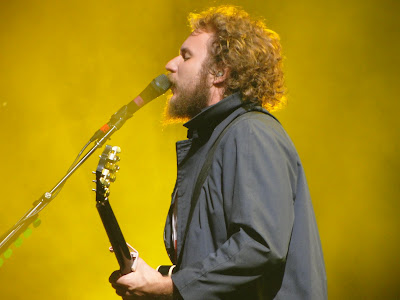 There's no way that my photos can represent the awesome of My Morning Jacket at the Open Air Theatre, but like I said, I felt pretty privileged to have a photo pass and do the best I can with the tools I have. I did catch a shot of the set list which had 26 songs...the last two weren't played because MMJ played right up until curfew for OAT but the set had moments of beauty, moments of bliss, and full on rock out moments. Dondante, for example, clocked in at nearly 14 minutes and the total set was just shy of 2 and a half hours. I'm sort of a late-on-the-MMJ-boat fan, so the songs I really appreciated were the more mainstream ones, but I know that most of my "I've-seen-MMJ-since-they-played-dive-bars" kinda friends also appreciated them pulling some older material out of the vault. I have to say personally that while Jim is a genius on guitar, it's a lot more fun to watch him wander around the stage without and instrument, strutting with his cape or a towel over his head. Either way, everyone present at the show last night felt the joy that Jim expressed about being on the road and about kicking off the show in San Diego, which garnered comments about our beautiful weather more than once. Kentucky, apparently, really sucks right now with a sweltering summer. To that, I say, Jim, you're welcome back to San Diego any time and we'll always have a place for you here.

I didn't realize when I was uploading the photos that they would be so small...I seriously sometimes suck when it comes to the shortcut. These are just a handful of the 319 that I shot. I might try to add some more later.
Posted by Rosemary Bystrak at Thursday, August 12, 2010