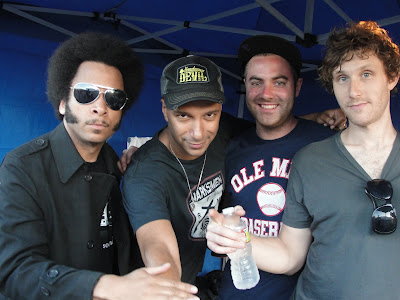 So I'm sorry I was offline and didn't have any updates on Tuesday, but between the chaos of my NPMT showcase (I'll explain later) and spending all day at the Warped Tour, I wasn't able to get any webby time. The truth is that even at Warped Tour, where in the past I hopped from stage to stage to stage, this year I really only saw a few bands and spent a lot of time in the backstage areas where, according to the release I signed, I'm not really allowed to discuss or photograph. Still, it was an amazing day and I'll get to posting some photos later (still looking for a miracle photo uploader, by the way), but I got a couple videos that I wanted to share right away.

The first one is an interview I did with Fake Problems. I seriously love this band and they were the first band I got to see upon arrival. Later I caught up with them and Jon Pebsworth, who runs their label SideOneDummy...you might also know him as the frontman for Buck O Nine...and after trying to contact Tim Pyles to do an interview, I had to suck it up and do one myself. So I'm sorry, of all the things I do, interviews are not my forte, but I love Chris and I want you to love this band and demand that they get their asses back to San Diego.

Later, when I realized Street Sweeper Social Club was playing, I called my old friend Jason (who currently plays with Kenan Bell). Last time SSSC played in San Diego was with Nine Inch Nails and Jane's Addiction, and he kindly hooked me up with backstage passes, so I wondered if he had returned with the band. Turned out he was here with Tom Morello, so we met up backstage and they let me capture their celebratory toast for the release of their self-titled record.

Like I said, I'll get around to posting all of my photos from the day, but wanted to share these videos. For now, my forehead looks like someone slapped me with a dead trout and I've had enough sun to last me awhile, so I'm gonna hit the hay and hope I can get some solid sleep tonight.
Posted by Rosemary Bystrak at Tuesday, August 10, 2010