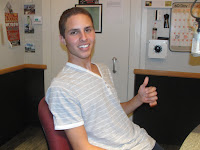 I have had such an excellent weekend and I know I have three months of photos to post (not to mention those 200 emails that I haven't gotten to yet), but I need to burn off some energy and try to shut my brain down, so I thought I'd bust out a quick post about my day.

It started in typical fashion, with me firing up the laptop as soon as I woke up, only instead of working through e-mail, I was designing a setlist. On Saturday night I saw Tim Pyles at the Casbah and he told me that they didn't have a scheduled guest to do Sunday night's Coup D 'eTat on FM 94/9, and asked if I wanted to do it. I've never done the Coup before, and of course I love chatting on air with Pyles whenever I can, so naturally I agreed. I played with my iTunes (realizing how much of my music still isn't loaded) and put together a 42 minute set of music, with seven local songs and five under the radar songs, had a couple glasses of wine with my friend Christopher at Kensington Cafe, then headed down to the 94/9 studio.

Unfortunately, there was a mixup at the station and they did, in fact, have a guest scheduled. It was Matt Burke and he was the sweetest kid (and hopefully future sd:dialed in intern!!) and had a great setlist. What Tim decided to do was to have me play my non-local music during FTP and my local stuff (to promote North Park Music Thing) during The Local Pyle.

In case you missed it, here are the songs I played tonight:

FTP:
Frightened Rabbit "Nothing Like You" - I played this song for my friend Natalie. We share a mutual love of this band. They're playing at the House of Blues (presented by the Casbah) on October 14. Find tickets here.

Adam Haworth Stephens "The Cities That You've Burned"- I was always a huge fan of Two Gallants and saw Adam earlier this year in Upland at a place called The Wire as well as at the Casbah. He was touring with my buddy Rocky Votolato so I loved those shows. He has his solo debut album being released on my birthday (!!) September 28, and is playing a short tour to promote. He'll be at the Casbah next Sunday, August 15. Tickets are available here.

Mumford & Sons "White Blank Page"-I've seen this band twice and absolutely love this band. I'm keeping my fingers crossed for another tour...maybe they should play this year's 94/9 Holiday Hootenanny. (Garett Michaels, can you hear me?)

The Kissaway Trail "Beat Your Heartbeat"- I saw this band open for The Temper Trap earlier this year at the Belly Up. In fact, it was the day before their CD was released, but they had copies available and I listen to it all the time. They're from Denmark, so I'm not sure when they'll be back around. This song was a dedication to my new friend Dave who told me he's been a fan of the blog for awhile but we barely met on Thursday. Funny how that happens, eh? 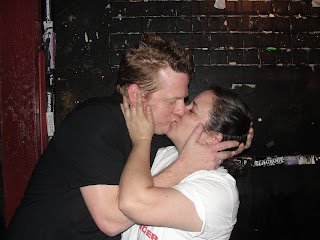 Not played: Jace Everett "Damned If I Do"- I didn't get to play this song, but I wanted to because it was one of my favorite recent shows and apparently this photo was quite controversial among some of my readers and some Jace fans. We didn't make out, it was all in fun, obviously we were just posing for the photo...I wanted to play this because it was in a recent True Blood episode (besides his singing the opening song for the show) and since it was Sunday, being on the radio meant I missed this week's True Blood episode.

We hit the local show and Tim let me hang around until all of my songs were played. I was there to promote my showcase and got a few other participating bands in, too.

I also snuck in a couple other bands:
Zoo Seven "Lifesaver"- I've got a whole post to come devoted to Zoo Seven. Stay tuned.
The Howls- I don't remember which track Pyles played, but you can download their EP. I'm booking Thursday nights at West Coast Tavern, so they'll be playing there on 8/12 around 9pm. The show is free. We had fun talking about the awesome food and drinks at West Coast Tavern and I belive I said "Donkey Punch" at least three times on-air...as a drink at West Coast Tavern, it's a double mule, but perhaps you know its other meaning?

Anyway, it was a really fun time and thanks to everyone for the kind tweets and the few people who called in, too. Thanks to Tim Pyles and FM 94/9. I will come back in any time you'll have me. As Tim says, "I'll see YOU at the show".
Posted by Rosemary Bystrak at Monday, August 09, 2010