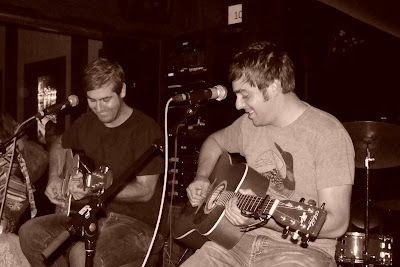 It was really magical how a small group of people were able to put their collective resources and contacts together to get a show for Roadside Graves after their planned venue canceled their show. I love local music, but I also love when touring bands come here and I never want the good ones to leave with a bad experience. The night had a few snags...like having to borrow mics and stands from Bar Pink...but again, people stepped up and made this a killer show. Greg Gibson kicked off the night with a great set, with Frank Green helping him with guitar and harmonies. I love these guys and you already do, too, right? So much talent in this city, it often times still leaves me awestruck. 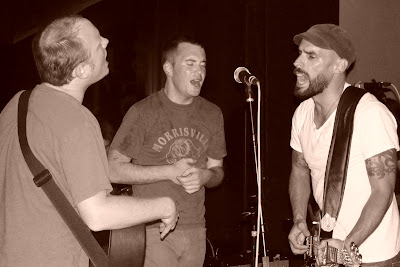 Roadside Graves had six guys in the band (so I have no idea whose living room or backyard they could ever pull off on a Monday evening/night) and contrary to my description of the band being bluegrass-y, these guys were puro rock n roll. They were high energy and reminded me of a lot of the bands I'm into right now...Fake Problems, Gaslight Anthem, or the new Against Me record, and would be perfectly suited to play with the Silent Comedy or The Howls for the revival feeling of the music.

After the night wrapped up and all the gear was packed away, we all hung out into the wee hours over at Bar Pink where the boys showed their first sign of being from Jersey by discussing "grenades". They were fantastic and I'm glad they didn't leave town without having played a show. They don't tour often, but you better believe when they do I'll do whatever is in my power to get them back here.

I shot some video of the band and I attempted titles, but if I got them wrong, please let me know. It really was a great night and I was impressed by the number of people who showed up when we literally just had hours to promote the show. Huge thanks for David Cohen for letting us book the band at West Coast Tavern and to Bobby for being such a gracious host with such short notice.