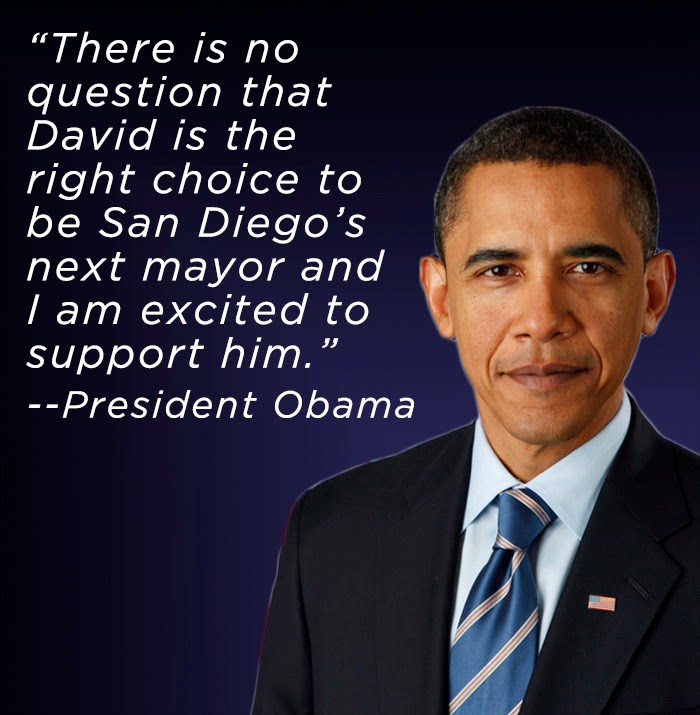 This came in from David Alvarez's campaign over the weekend:

...President Barack Obama endorsed David Alvarez to be the next Mayor of San Diego, applauding his focus on creating jobs and ensuring every child has access to a high-quality education.

President Obama said, “As a native San Diegan, David Alvarez has been a fierce advocate for his city, and on the Council, has led efforts to build a strong middle class, put neighborhoods first and expand opportunities for kids in and out of school. Today, with the city’s economy and neighborhoods poised to make progress there is no question that David is the right choice to be San Diego’s next mayor and I am excited to support him.”


Why does a presidential endorsement matter? Because the president understands that civic engagement and cultural and political momentum starts on the community level. As the 8th largest city in the United States, what happens here matters. And perhaps you don't follow local politics beyond news headlines and scandals, skewed polls and news stations with biased information, but I happen to spend a lot of time watching City Council meetings. It was so exciting to see the Council move forward on issues that have stalled over decades in this city, and it was always fascinating to see Faulconer and Sherman talk out of both sides of their mouth...they're with the majority except for some caveat and so they vote against the council- on minimum wage, on prevailing wages, on bonds, on issue after issue. I'm proud to support David Alvarez, who would be the first Latino mayor for San Diego, and I'm proud that The Casbah, our Interim Mayor Todd Gloria, and now the president of our country, Barack Obama, all endorse David Alvarez.