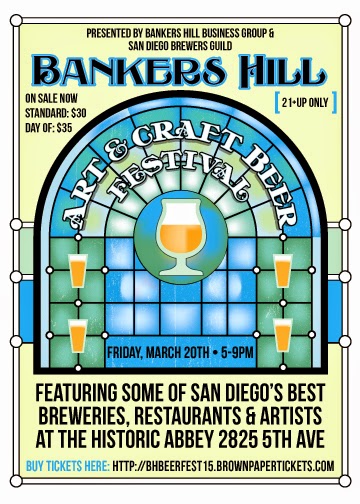 The magical time is upon us again when we get to hangout in the historic Abbey on 5th Avenue and get really silly. But the ante has been raised folks! That's right, this year the festival still boasts unlimited BEER and FOOD tastes (no one else does this by the way and on the off chance they do you're paying $65+), but they aimed for the stars and recruited some of BH's finest establishments: Cucina Urbana, Barrio Star, Bankers Hill Bar & Restaurant and Pizzicato will all be slinging delicious tastes.

Oh and did I mention the 14 breweries you will be sampling from?


So, here's everything you need to know...

Don't. Miss. Out. There is no better option for fun in the city this Friday night, at least between the hours of 5-9pm. Tickets go up $5 on Friday so get them while you can.
Posted by KZ at Thursday, March 19, 2015