I have had a hell of a weekend. We went snorkeling, chilled out, hung out for my dad's 71st birthday, and I thought it would be low-key and I would get ahead of email and social posts for work and get caught up when, BAM!, I got a FINAL NOTICE from Photobucket that they're switching to a subscription based model and all photos over their free limit would be deleted by Monday, September 9th. I wouldn't have noticed, to be honest, because my original account is linked to an email that is just chock-full of spam which I never read. So I missed months of such notifications. However, I had a second account affected, too, which is when I took it seriously. More of my woe-is-me  tale after the jump (and actual stuff I'm reading and watching)


When I tried to download my pictures, which I OWN (and Googled several times for different methods), I had to do so in an ass-backwards way of (1) downloading the app on my phone (2) opening every single folder and downloading that folder individually (3) transferring those folders from my phone to my laptop and (4) deleting those folders from my PB account. I had over 10k photos. It took me about 14 hours of dedicated time to be able to grab all my photos back, and then I deleted all of my accounts, because FUCK THEM. But what it means is that if you come across any archives of my posts from the start of this website in 2006 through 2012 that had photos, they're now GONE, with a Photobucket ad taking their place. Whether I go in and replace the photos remains to be seen, but it was a nightmare. At the same time and as I noted in my Facebook post, free doesn't last forever and if I was smarter then I should've known it would one day run out. And it's not the first time they pulled this, but the last time I was able to fix at least my frontpage and Music Venue page. 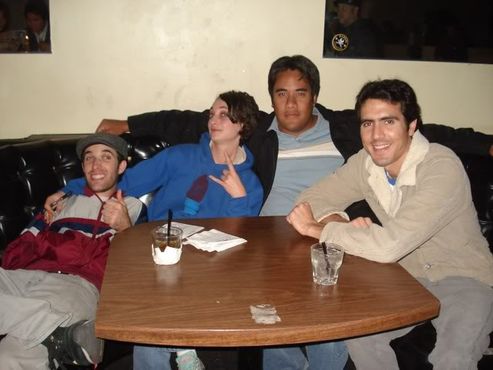 This time around, I actually took a look at many of the shows and photos and friends and it felt like when you have to move or go through a breakup and then instead of packing, you get lost in old photos and I have to say I found some gems that I hadn't thought about in awhile. So maybe I needed the kick in the ass. This one is an old photo from the SD:Dialed In 1 Year Anniversary. I've now been doing this for 13 years come November (and blogging in general since 2001) and all I can say is that I can't imagine my life without the gifts this little project/outlet has given me.

So anyway, I was trying to do these What I'm Reading & Watching posts weekly, but summer got away from me, and on top of all things, my laptop is the pits and we thought I'd be getting a new one, but living a busy life, car repairs, buying short term storage backups, camera repairs, school uniforms and all the other shit life throws at you has postponed that goal a little bit. But now I have this crazy list that I haven't posted in a couple months and it's definitely a lot. Feel free to peruse as you please. And just a note, I was reading a ton of books but that came to a halt with summer after Nova came back from St. Louis, but I CANNOT WAIT to read The Testaments by Margaret Atwood, the long awaited (15 years!) sequel to A Handmaid's Tale. I have it on hold at three separate library systems, totally legit. If you didn't hear Margaret Atwood read the first 3 chapters on NPR, do yourself a favor.

It's Just That Kind of Morning. It's Morning in America. - Esquire

Out with "Pro-Choice." In with "Reproductive Freedom." - VICE

The Unsettling Rise of the Urban Narc App - CityLab

Immigration panic: how the west fell for manufactured rage - The Guardian

Trigger Warning: Suicide
I decided to post this after the suicide of musician Neal Casal. Written by his ex-girlfriend, but long before he took his own life.
Of Breakdowns and Breakthroughs


And I think I wrote about how obsessed I became with The Act (Hulu) and watched the documentary Mommy Dead and Dearest (HBO.)
E! NEWS EXCLUSIVE: Gypsy Rose's Rare Prison Interview Reveals Wedding Details and Relationship Drama
Posted by Rosemary Bystrak at Monday, September 09, 2019