I can't believe I haven't written a diary post since Thanksgiving weekend! So let's rewind...that Monday, (11/28) I went on a date (!!!) which involved dinner at Lucha Libre, The Muppets movie, video games at Dave & Buster's, and late night wine and a brutal game of Scrabble. Super awesome. The boy is super cool and will be completely mortified that I'm writing about it.

The next day was the Slacker party with Fitz & The Tantrums. Jeff and I had dinner at Bar Basic and fearing a crowd, he left and I stayed at the party which was awesome. Free food, open bar, one of my favorite bands around, and a completely disappointing crowd. Over 5000 people RSVPed to the party and there were maybe 300 people there. Perfect for people like me who get claustrophobic, but it seriously made me second guess this town...what else can they give you for free to get off your couches?

After the show, I went with Jake to the W Hotel where Fitz & The Tantrums were staying and we hung out with the guys in the lobby for a couple hours before eventually heading to the Casbah for Russian Circles. At least metal bands still have a draw judging by the 200 synchronized heads bobbing in the crowd.

I hadn't planned on attending the KPRI Holiday Soiree on Wednesday (11/30), but Fitz put me on the guestlist, so Chase and I went downtown. We got there just after The Head and The Heart started and it was a fun show. We were in the 2nd row, which was actually the 4th row due to 2 extra rows of movable chairs set up in the orchestra pit, but it was definitely choice seating and I had a blast being there for The Head and the Heart, Mayer Hawthorne, and Fitz & The Tantrums. After the show, we went to the Lincoln Room (which has all night happy hour prices every Wednesday), and had some drinks and food with Jeremy, the keyboardist from Fitz, and a group of friends. Definitely a good time.

Thursday night got a little crazy. I went to the Bootlegger for the SoundDiego Live party but got last minute invite to the Playboy/Jack Daniel's/Harley Davidson party at FLUXX with Black Rebel Motorcycle Club. BRMC played at 8:30, right after I got a confirmation that I was on the list, so I grabbed Kevin and Rebecca Joelson and we walked over to FLUXX. I hadn't eaten before the party, so I maybe shouldn't have been ordering Jack and Gingers like they were Kool-Aid but whatever. BRMC played a full set and then we headed back to the Bootlegger for the rest of the SoundDiego show. From there I headed off to the Casbah for Cass McCombs which I would have probably enjoyed more if I wasn't starving.

Friday night rolled around and I had a show at the Irenic. The room was amazing, the music was perfect, and the turnout left much to be desired. I'll leave it at that. 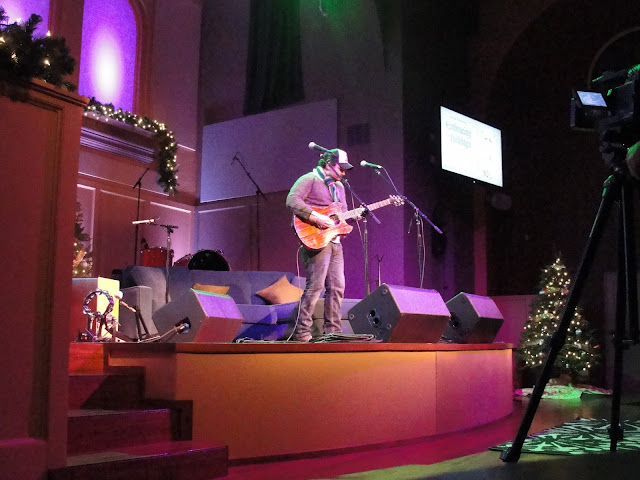 Saturday was the FM 94/9 Holiday Hootenanny. You can see my pics here. I went with Pyles and he had been sick, so we left during MMJ and he dropped me of at the Casbah for Little Hurricane. If you saw me there, all I can say is I'm sorry. Sometimes I am a complete dumbass.

Fast forwarding through the week, Sunday I went to the Casbah for Girl In A Coma. I got my friends Jesse Nova and the County on the bill so wanted to catch their first Casbah show. Monday was a Hulu day, then Tuesday Jeff and I flew up to SF for Other Lives at Cafe du Nord. After arrival, we had a late lunch and then checked into the Nob Hill Hotel only to find our room only had one bed. Not okay. We ended up cancelling that place and stayed at The Oasis which was anything but. Pretty sketchy. The show was amazing and we hit up a bunch of bars around SF before and after the show. On Wednesday we took the full route of the Powell-Hyde cable car to Fisherman's Wharf, had an awesome lunch at Blue Mermaid, then flew back home. That night I was in bed by 8pm.

Thursday was an awesome day. I had lunch with Michael McGraw and we ended up picking up a TV at the thrift store for twelve bucks so I don't have to deal with my dead picture on my TV anymore. That afternoon, Jesse LaMonaca came over to bring me some venison chili that he made from the deer he shot in PA, and damn it was tasty. We dropped by Blind Lady for a beer before I headed to the Casbah for Devon Williams, Miniature Tigers and a bit of Tennis before catching Jeffrey Lewis & The Junkyard at Soda Bar and some crazy ass post show cocktails at Eleven. Last night I went back to the Casbah for The Cave Singers and The Builders and the Butchers and now I'm getting ready to head to Wrex The Halls. Life is pretty insane these days but I feel really lucky to live this crazy life. See you at the Sports Arena!
Posted by Rosemary Bystrak at Friday, December 09, 2011