To a New Year filled with Beer... 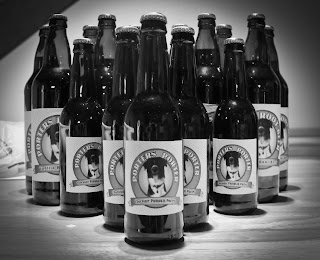 December has been an incredibly busy month, and I'm not talking about the cluster fuck that Christmas shopping can be because thanks to the power of Amazon, I was able to max out my credit card at the beginning of November. I am referring to what I like to call "Decembeer," a month where Holiday ales and seasonally released beers sneak their way onto shelves and taps like Santa down a chimney. And what better way to kick off Decembeer than with the 15th Annual San Diego Strong Ale Festival at Pizza Port Carlsbad? There really isn't a better way.

In my opinion, this is one of the finest beer fests San Diego has to offer. With over 80 beers measuring at a minimum 8% ABV, this was definitely a Motel 6 kind of night. Tom Nickel (Owner of O'Brien's) and Jeff Bagby (Brewmaster of Pizza Port Carlsbad) organize this event every year at the Pizza Port Carlsbad location, which also hosts the Real Ale and Sour Ale Festivals throughout the year. As if Pizza Port already didn't have enough great beers to showcase, they also have insanely good pizza to grub down with that grog, so if you're ever looking to check out one of their festivals or just make your way down to the brewpub, you can stay up to date on all their events here.
Keep reading after the jump.


Some of the honorable mentions that I was able to taste at the Strong Ale Festival included Boneyard Brewing's Notorious IPA3, Avery's Rumpkin Strong Ale, Pizza port's I-5 Brown and Three Floyds' Boo Goop which was a Buckwheat wine (a first for me). These were only a handful of the 80+ brews that they were pouring, but I was happy to report that I stumbled across Pizza Port Carlsbad's Kung Fu Elvis Pale Ale. I had been searching for this beautifully crafted pale for years when I had first tasted it at the San Diego Festival of Beer in Downtown, only to be found again at the brewpub. It pours a thick, white head while the aroma maintains a nice balance of floral and pine notes. The beer is light bodied with a crisp and hoppy initial taste, but smoothens out with its sweetness. Definitely one of my top 5 favorite pale ales of all time. Give it a shot next time you're up at Pizza Port Carlsbad.

For some damn reason, I had a horrible headache the next day, but I had to carry on with my normal weekend activities which consisted of transferring a homebrewed Chocolate Pumpkin Porter into the secondary fermenter. My girlfriend really wanted to brew a beer as a gift to her family for Christmas so I kindly obliged to the idea. I have done several homebrews over the past few years including a West Coast Pale Ale, a Dry-Hopped IPA and a Colombian Chocolate Brown Ale, but this was by far the most experimental brew I had done. After a few weeks of fermenting and then a week of bottling and labeling, we were able to get the beer in the hands of our relatives just in time for the holidays. We named it after our dog, Porter, who happens to be the poster child (or pooch) for the label. 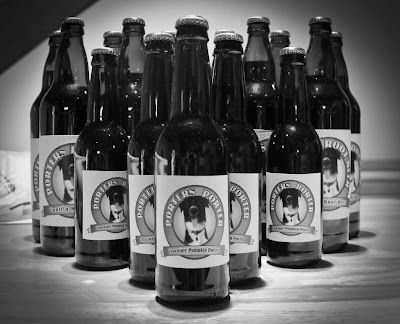 Having cracked open a bottle on Christmas day, I can honestly say that I am very happy with where this beer is going. I generally like to age my homebrews for a minimum of two to three months, but considering our tight holiday deadline, we managed to get his one out in 5 weeks flat from boil to popping the bottles open. The beer has a fine balance of pumpkin flavor that is not too overpowering. The color of the beer is just where I wanted it to be, a dark brown hue that doesn't let any light through. The head is very thin at this point but will get better as the beer ages. Luckily, we still have a fair share of bottles left so I plan on opening one every few months just to compare how the beer matures in time.

So now, as I type this, I should be packing for the big New Year's weekend in Big Bear that I'll be spending with some close friends but I wanted to take the time to personally thank Rosemary Bystrak for giving me this incredible opportunity to be a part of San Diego: Dialed In and contribute my thoughts and adventures in the craft beer world. She is an amazingly talented woman and I am glad to have met her this past year. Cheers to you Rosemary, and to a New Year filled with Craft Beer! And a Happy New Year's to all the SD: Dialed In followers out there. We wouldn't be here without you!