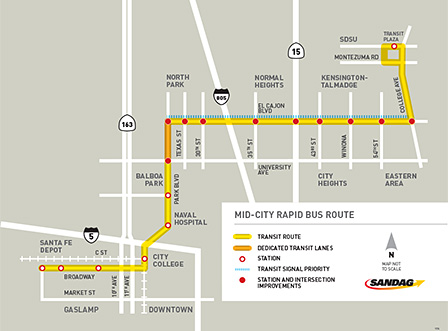 In June of 2013, construction is set to begin to make way for the Mid-City Bus Rapid Transit route, also referred to as Mid-City Rapid or BRT. On Thursday, we dropped by the open house at The Boulevard's offices to check things out so I wanted to share some of the information because in one way or another, this will affect everyone in Hillcrest, Normal Heights, City Heights and beyond.


The Mid-City Rapid will provide North Park, City Heights, and College Area residents, students, and workers with a fast and reliable service in a key transit corridor in the region.

Rapid bus services achieve faster travel times by using measures such as transit signal priority, dedicated bus lanes, and limited station spacing. Mid-City Rapid is among the first of a new breed of Bus Rapid Transit (BRT) services that SANDAG is building in collaboration with the Metropolitan Transit System (MTS). The project is an integral part of a regionwide strategy to create a BRT network, so residents have travel choices that are attractive alternatives to driving.

So there are several points that are important with regard to the BRT. If you are an MTS user, the new system will eliminate route 15. In my area, the 15 currently stops at 33rd and El Cajon Boulevard. This is the only stop the bus makes between the 805 and I-15. The NEW stop, again, the only one between the 805 and I-15, will be at 35th Street. There are a few reasons why I hope this is reconsidered.

First, it makes sense to have a major stop at Pancho Villa. It is the only grocery store available in the direct area, with the Vons on Howard and 30th or on Adams and Cherokee the next closest. While the 1 will still be servicing the area, it's frequency is much more limited. Second, the new stop for the eastbound buses will be directly in front of The Void. I'm a bus rider and I'm a regular patron at The Void, but do you really want your kid getting off the bus directly in front of a bar? Or little old ladies? I mean, I love my rock n roll crowd, but we're kind of a rough bunch and can be intimidating to people walking by. Conversely, smokers at The Void step right out in front of the bar for their fix, yet all bus stops are smoke-free within 25 feet. Smokers will be moved to the back lot of the bar, possibly requiring a second security guard at the back door, and increasing noise to surrounding residences. Nova's window faces the Void, and fortunately she's a pretty sound sleeper, but the bar is definitely loud most nights of the week, and the cops have been coming by with increased frequency. Sure, nobody gives a shit about smokers and smokers rights are ever dwindling, but it is still an issue worth considering.

The new BRT is set to run from 5am to 1am everyday, with 10 minute intervals during peak times and 15 minute intervals for non-peak and weekends. Why not move the stop to the north wall of North Park Produce where bus passengers won't be interfering in businesses? Or even better, keep the stop at 33rd and add a second stop at 37th, where there's a pedestrian crosswalk already in place? Why does the BRT have three stops between the 805 and Park, but only one between the 805 and 15? Has nobody considered that this stretch of ECB is also the main access point to all of Normal Heights? And while we're at it, if access is really a key issue here, shouldn't there be more north-south access instead of having to go all the way to 30th for the 2 to connect to Adams? I'm capable of walking or biking, but what about the people who aren't?

Believe me, I think it will be great when I can bus from my house to Balboa Park easily, but what does this do to the Mid-City Bike Corridor project? Committing to new bus plazas seems to eliminate all possibilities for a protected bike lane along ECB, and could also mean not even a Class 2 route. It isn't really clear how these projects work together or in opposition, so I think that more community meetings should be held, and though I was a little slow in getting involved, you can be sure I'll be at as many of the meetings as I can.

A friend of mine posted a couple dorky LA Transit videos, but they address greater transit issues if you're interested (after the jump).

Here's some long but interesting videos about Public Transportation in Los Angeles.