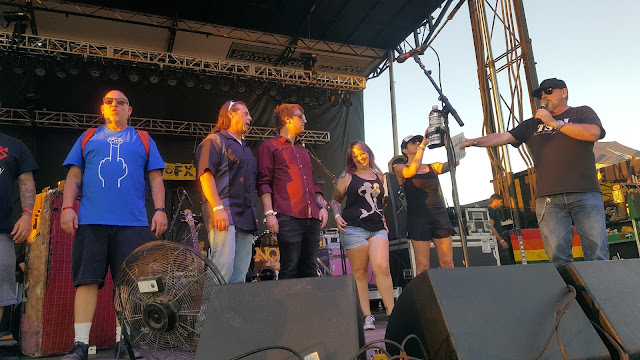 I'm stunned to read the news that Michael Halloran, program director and afternoon host at 91X, has been let go. I mean, I guess we're all used to the radio shuffle here in SD, every year seems to see some big shakeup and as SoundDiego mentions, we should expect to see more when 94/9 begins their Padres broadcasts, but it doesn't mean we ever get used to it...not as listeners of the stations, not as friends of the jocks and programming directors and music directors, and even as a veteran of advertising where this kind of thing seemed to happen all the time. When I was let go from The Observatory, Hal was one of the only people to call me to check on me and I only hope he's staying in San Diego because he's an essential part of our music culture. I suspect, based on this inquiry about Garett Michaels "logging off" of KFM-BFM on Friday (and disappearing from their website), we might conclude he'll be installed as PD of 91X or oversee programming for multiple stations. But I guess we'll know when we know.

Here's the full article on SoundDiego

Bye-Bye Chargers?
In meantime, there's another article circulating social media, and that is this ESPN story that the Chargers are, in fact, leaving San Diego with an announcement to come tomorrow. While I would love for this to be true, as I commented on Facebook, I would love to do a FOIA request on all of Kevin Faulconer's e-mail tonight. And Sherman, and Zapf, and all of the City Council for that matter. This has been going on for years, of course, even before the renovations and upgrades that got us the blackout ticket purchase deal. I hoped that with November's resounding votes against Prop C & D, that this issue would be dead and gone. But I'll believe it when I see it. Meaning even if an announcement is to come tomorrow, I won't believe it. Not until the Chargers kick-off on someone else's, not paid for by San Diegans, field.

Let's think about this. This is the same team that "essentially pays no rent". This is the team only willing to contribute $350 million to a new San Diego stadium, even though leaving will cost them a $650 million relocation fee. And if they decide on moving, they still have to find a place to play until that L.A. stadium is finished in 2019. You really think they're playing in Carson Inglewood with half the seats as the Q for two years?? And on a really superficial level, you think they want two blue & gold teams in the same stadium? Give me a freaking break. I'm just not buying it.

But I hope it's true. We've wasted enough City and County resources and money on this billionaire family. Time to move on.
Posted by Rosemary Bystrak at Wednesday, January 11, 2017