Wednesday night for most people means that the week is more than half-over, but for night crawlers, it is just another night to check off the list of good times had and good music heard. I hadn't been to a Commune Wednesday in a few months (CW happens the last Wed. of every month) and since recently I have been really digging The Modlins, even though they beat the band I play in for Best Pop Album at the SDMAs ;) , I was very excited to head to Bar Pink last Wednesday. I started the night with a pre-party in my car, it was a strict VIP list of Oasis, and Mr. Miller. 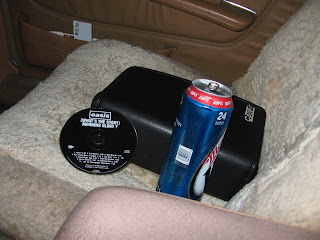 I entered Bar Pink to find a great crowd hanging out, and the band was just starting to get setup. With a PBR in hand, I scoped out the fashion and artwork on display. From what I saw, there was a great T-Shirt rack, and some great bracelets by Corine, who was very friendly and was promoting good vibes with her art. (www.myspace.com/corinegrant) 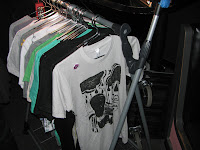 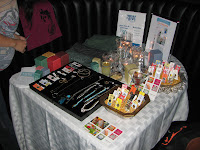 Shortly after I arrived, Alex from Swim Party showed up, as well as all the muchachos in Writer. While I was hearing stories from Eli about playing in a metal band, the host of Commune Wednesday took to the mic. She spoke about the importance of voting as well as letting us know that a portion of the proceeds from the art sales go to music education for kids. It's awesome that the event is so great on multiple levels, the art, the music, the message, make a difference, make yourself heard.


After the introduction, The Modlins kicked in full force with their feel-good pop-rock that is sweeter than the local soda-pop fountain. I find it beautifully ironic that they don matching grey suits, it seems a contrast to the vibrant, colorful melodies that are completely fantastic. It's almost like the grey suits create the illusion of watching them on a black and white TV while you drift into a Candyland of imagination. I enjoyed their whole set, but truthfully, I have never been fond of the Bar Pink's sound. It just doesn't seem right, maybe it's the carpet, or the foam ceiling, but with $2 Tecate's and PBR, I love the place none-the-less. After The Modlins had brought the crowd into a hip-swayin' frenzy and ended their set, a raffle drawing commenced. By the way, this was a free raffle drawing, which included such prizes as t-shirts, CDs, and bracelets. I happened to win a T-shirt designed by Maeve Riley, which I am wearing as I write this blog, haven't taken it off since Wed., and it's still the cleanest shirt in my house. Overall this night was fantastic, and driving home I was super excited for what Halloween weekend would bring. 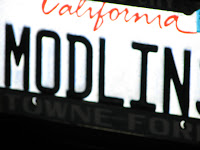