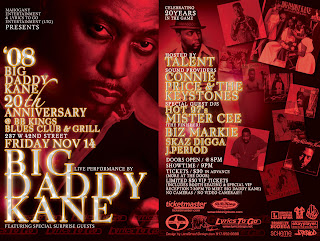 yo word up This is Jake and this is my first posting for sddialedin. I recently had the honor of backing the great Big Daddy Kane in NY. I met Kane back in January, while playing with Connie Price and the Keystones. We backed him on a show up in Hollywood at the House of Blues.

I was definitely nervous to play with such a legendary performer,but Kane is one of the nicest, most professional person I've ever worked with. I flew into NYC on Thursday and we rehearsed all night. We woke up next day and took the subway down to Brooklyn for the best pizza I've ever had. We returned to the hotel and made our way down to BB King's for the show. It was already a madhouse. I was sitting backstage waiting in anticipation. Finally it was time to get onstage.
it was the whos who of the hip hop world.ice t was in attendance,as well as busta rhymes.eric b came onstage to give kane props.marly marl kanes producer was also in the house.it was one for the record books to share the stage with the greatest mc of all time.