Wednesday night I was ecstatic to see Frightened Rabbit, The Spinto Band and Dynamite Walls at U-31. I was all caught up on sleep and had a productive day checking out the new Soda Bar, working on my brother-in-law’s website, doing some job searching, and I was rearing for a good night. I made sure to get to the show early so as not to miss any of the music. Click 'keep on reading' for the full post and videos.


There was plenty of time so I chatted with the band outside for a bit since it has been ages since I've seen them. Eventually they took the stage and started the show with a short set and played two new songs, then gave an encore of another new song that they had just been recording and hadn't yet played live. Tom had told me about the new songs before the set so I made sure to have my camera ready to record, so you can hear two of them here.


It was funny, too, because after the song, Tom introduced “Mystery Girl” by saying “This is another new one, Rosey.” In the chorus he sings something like “Her kisses are sweet like Roses” but it sounded like “Her kisses are like Rosey’s” and I felt mildly embarrassed. No, Tom and I have not made out.

The Spinto Band performed second and after having listened to their latest album "Moonwink" about 20 times in the past couple weeks, I was really looking forward to seeing them. They definitely did not disappoint, though I'd retract my earlier assessment that they remind me of Snowden. There's one song that has a similar hook, but overall they are really very, very different. The lead vocals alternate and the voices are so different, they could easily be two bands, but that turned out to be a really good thing because every song sounded very different but unified by the same quirkiness and backing energy. 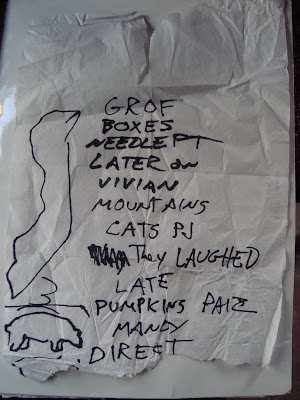 (funny thing about that setlist...I asked one of the guys for it, and he said, "I even drew California." When I told him it was backward, he laughed and said "It's the dyslexic California.")

And holy shit, they played kazoos!


By the time Frightened Rabbit played, it seemed like the crowd there for the bands had dwindled and people were showing up for the dance party portion of the evening, which to me is just so sad, because the band is incredible. I don't really like to call people out, but to the drunk girl who thought she was so cute by GETTING ON STAGE while the band was playing, you aren't cute, it wasn't funny, and in speaking to the band after, they were not happy. I grabbed Gary to get her off the stage and the fucking gall of this chick to think it was ok to stand first behind the keyboardist, even after he tried to discreetly tell you to get the fuck off the stage, was not cool. Then she moved behind the amps next to the drummer who was clearly irritated. Either way, the set was beautiful. I read somewhere that the singer sounds like Adam Duritz with a Scottish accent and I was glad someone else thought so, because I could listen to Frightened Rabbit alongside "August And Everything After" without any change of mood or emotion.

You can hear the singer pissed off here at the end. "We've got a brand new member. Don't what the fuck her name is."

I highly recommend checking out their Daytrotter Session, too.

Anyway, despite the dumb broad onstage and despite the too loud DJs between bands and despite the crowd who was just waiting for the bands to be done so they could dance, it was a great show. Should've been at the Casbah, but that's the way it goes sometimes. After the show I attempted to hit the Beauty Bar, but it was closed early. The Ken Club was also closed because a pipe had burst. So I went to Pink Elephant where it was completely dead and decided to call it a night. Maybe I'll get back on a life schedule.

I maintain that Spinto could well be a grown up gang of corner ruffians. I mean jeez, they're from Delaware after all. It's feasible.