On Friday, November 19, there were a million places I wanted to be, but by the time I got my shit together, I decided I didn't need to drive anywhere when there were two new bands I'd yet to see playing just steps from home. The lights were low the whole night, so I didn't even attempt photos, but I was finally able to check out Boomsnake, see Cuckoo Chaos in their first show at a venue, and see Charles Musket again.

Boomsnake are from Portland. Or I should say they formed in Portland but are originally all from Southern California, and have recently moved back to San Diego. They're a three piece and the vocals, for at least part of the show, are sung in a high register, a la Neil Young "Harvest". I really enjoyed them and I'm sure they'll be making a mark in the San Diego circuit.

Cuckoo Chaos is Jackson Milgaten's new band, with Jeremy from Vision of A Dying World, Craig from the Power-chords, and Jackson's roommate Scott, who takes the majority of vocal duties from behind his keyboards. In a style that Jackson and his circle have perfected, you can expect multi-layered harmonies and impressively in this project, some sweet banjo playing. You can catch them at this weekend's Sight & Sound at Planet Rooth Gallery.

Charles Musket is another local offshoot project with Anthony and Spencer from Red Feathers, Aaron from Scarlet Symphony, and Keith Milgaten from Vision of A Dying World, and as Aaron said, this is their fun project where they can all just let loose without any pretense and just have fun. Though I must say, if I could form a band just to 'have fun' that sounded this good, I'd be all over it. But I have no talent and all of these guys do, so I'll let them have their fun while I stand mesmerized in the audience by yet another amazing band to join the elite bands of San Diego.

In writing this, I really regret not even taking one photo, but what can I say? My camera has limits.Oh, but I did get this one the night before at The Ruby Room. cutes. 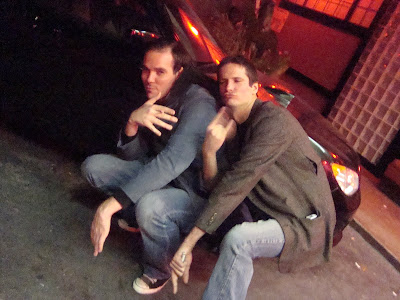 A lot of people are "moving back from Portland" lately. Apparently, it's not the indie paradise it's made out to be. Most people move back because there's no work up there. It's a great place to go if you A) have a job up there before you move, B) sold your house for a huge profit and can buy one up there in cash, or C) have family or friends who will let you sponge off them until you find work. For everyone else, the Boomerang Effect is in full force, which sucks, because Portland is supposed to be a really cool town.