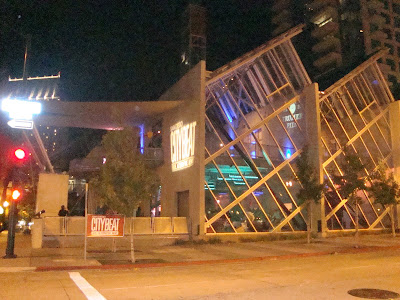 The day after my anniversary show, my wi-fi quit on me. I planned on writing, but instead had to catch up with real life...like cleaning my house, doing laundry, running errands, job hunting, and realistically, catching up on my shows, being a hermit, listening to music, sorting through e-mail and trying to figure out how I'm so behind on everything when I have so much time on my hands. Oh, and if you're on Twitter, it is so easy, when the wi-fi comes back, to just lose whole chunks of time reading tweets, following links, and reading online articles that people post.

But then there was Wednesday and I was back, ready to participate in real life. Jake and I had tapas at Cafe Sevilla before the CityBeat party. After the CityBeat party, we saw Dead Confederate at the Casbah. You can read all about it if you click 'keep on reading'.


While I knew there would be food at the party, one can never be sure how much food will be available or how many people you have to fight with for said food. And I love Sevilla. If you have never been, or haven't been lately, I recommend checking it out. Their happy hour is from 5-6:30 and the tapas are great. If you don't know what to order, here's my recommendation: Pan para dos (bread for two). Ask for pure alioli (in english, its aioli, but in Spanish it 'al' for garlic, 'i' for and, and 'oli' for oil.) Make sure to get the kalamata olive loaf. We also ordered the Albondigas al Jerez- meatballs in a brandy sauce, Croquetas de pollo (chicken croquettes), Queso Fundido (melted cheese to top on bread), and tortilla espanola (almost like a frittata but better). The best thing is that Sevilla is trying to get your business...so if you text a comment using their comment card, you get a discount code that knocks $10 off your next visit. I will be back very soon.

Anyway, from there, we walked to the Children's Museum, and it has been a while since I've been in this part of downtown and I was stunned by the beauty of the building. I wish the regular kids exhibits hadn't all been put away, but it was cool. I definitely know I'll be back with my niece. There was a ton of food to be had, and plenty of drinks, too, and Steph Johnson and Lady Dottie entertained the crowd. It was definitely a fun party.

From the party, we made our way to the Casbah. We found out upon arrival that Apollo Sunshine would not be performing because the engine of their converted grease bus had blown up and they were stuck somewhere east of San Diego. We barely caught locals The Northstar Session, but the sold out crowd was in full force for Dead Confederate.

I have to say it was one of the most fun shows I've been to of late, if only because they had their own lights that made taking pictures a total joy...trying to time my snaps on an uncontrollable digital point and shoot with the flashes of their lights made for an experimental night. Not to mention being completely blown away by their music. I was able to squeeze up front with Jeff and go flashless for the night.

Video of 'The Rat' here.

I will say I got this sort of sad nostalgic feeling because Hardy on vocals has this disarming resemblance to Cobain in his posture, and at moments, even matching vocally. I don't think the band sounds like Nirvana, but there was just that something that made me feel something about Nirvana that I never felt before, I suppose making me appreciate Kurt in a whole new way for no specific reason, and in turn making me absorb and feel Dead Confederate's performance all the more wholly.

I should also say for the record that I had the chance to talk to Walker and he was such a cool guy, super friendly, and when we were at the bar he was so polite, like an ambassador why people should visit Athens.

I was completely blown away by the show and it was clear why FM 94/9 chose the band as one of their recommended for the month.

Incidentally, I've talked to the publicist for Apollo Sunshine and the band is fine so hopefully they can get their vehicle functional and make their way here.

I have the sad feeling that the next time Dead Confederate comes around, they'll already have outgrown the Casbah, but I'll keep my fingers crossed that they enjoyed the venue enough to demand it when they come back. And I do hope they come back because they were so good. If anyone there didn't see the magic in their performance they must be dead.