This post is starting with a story of seemingly random coincidence and the power of music, friendship, and touring.

About 4 years ago, a friend drove down from OC to see a band at The Casbah and I met up with him there. Somehow he got the wrong date and the band he meant to see wasn't even playing that night. We decided to make the best of it and watch these bands that were on tour with Transit War. This young band, Parksideview, from Atlanta, took the stage and totally rocked it with amazing tunes and lots of energy. They were too young to hang at the Casbah so they spent the night outside by the vans, my friend and I decided to keep them company and we ended up having rad conversations with Jake and Jeff Turner, two brothers in the band. After that night, I followed them online, witnessed the break-up of Parksideview, and the brothers formation of XO. Just as they were finishing their first XO EP, they announced that they were moving to NY to play in the band Say Anything. Well, they have been playing with Say Anything for the past 2 1/2 years, while also keeping their original project, XO, going. I have seen them play with Say Anything countless times and every time they are still the same awesome guys who we hung out with on the corner at the Casbah. It is so amazing how you can connect with someone and create a friendship with someone who lives miles away, but you get to see and hang with every time they tour through. So awesome.

So all of that leads up to XO going on an acoustic tour, where they landed at the Ruby Room last night. When I arrived, Smile Smile was starting and they are a duo that create beautiful harmonies and very rich, warm tones to nestle into. Very nice band. 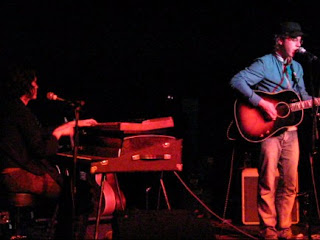 I had checked out all the bands on myspace, and Paper Mache had pretty heavy electric sound, so I was wondering how it would go over as acoustic. Honestly, it was awesome. The lead singer was belting out these really emotional lines and I thought they sounded way better than the electric versions online. Best quote of the night was "This stuff is way better than those street drugs" when referring to his mixture of sore throat spray and beer, he had gotten sick on the road and had his CVS bought medicines on stage. 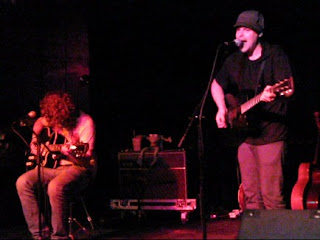 Closing out the night was the combo of XO (actually, just Jeff this time) and Shanti backing each other up and trading songs. They complimented each other really well, Shanti has great control of her voice ranging from a beautiful whisper to the most powerful crescendos that were out of this world, and Jake has a really honest voice that makes every song of friendship and love feel like a great diary entry. They played an especially good Death Cab cover and took a request from the crowd, it was a very beautiful and personal show.