On November 8, I spent the day with my family with not nearly enough sleep. My cousin came down from LA, and I actually got up early enough for breakfast. My cousin bribed me with the promise of a treated breakfast, lunch and dinner, and though I would've gone anyway, it was nice spending the day with family.

We started at Kono's in PB for breakfast, then hung out at Balboa Park. Here, my niece, my cousin, myself, and my mom, in assorted variety.

After a lovely day in the park, we had dinner at Nick's, I got my car, raced home to let my dog out and to change, then made it to 4th & B to arrive during the FM 94/9's band special set. Jake left me a ticket at will call and fortunately Junior let me jump the line so I could get in time for some photos.


So, the whole FM 94/9 crew went all out for their 6th anniversary show, playing a short 5 or 6 song set featuring Halloran, Pyles, Boomer, Trav, Drew, Owen, Anya, Swami, a couple guest moments from Brian Karscig of Louis XIV, Jake Najor on drums, and a bunch of other peeps from the station and guest moments. To me, it was the best part of the night.

When the FM 94/9 band finished, The Dirt Bombs took the stage and while I was enjoying their music, it was waaay crowded and being the broke biatch I was, I was not about to buy a drink to let myself loosen up, not to mention being completely exhausted from a day in the sun with family. 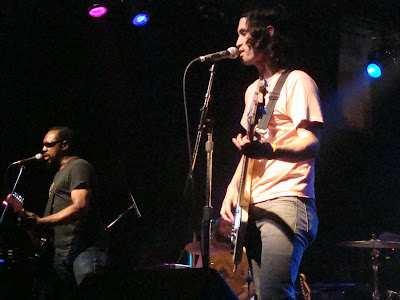 I ran into some friends and chatted briefly, but I decided I would make an escape to get some stiff drinks nearby, so I walked to Chee Chee. There was a crowd, Jeff was working, and I chatted with some girls from LA who heard that Chee Chee was the least expensive bar in downtown. After sucking a few down, I made my way back to 4th & B and hung out with Natalie during the end of Delta Spirit's set. This is the part where I'll admit that I probably would've stayed for the whole show had I been offered a photo pass, but I was told that none were given out, which was clearly a lie, since Natalie had one (though she's a real photographer, I know) and Norton had one, along with all the 94/9 peeps. I know I'm spoiled but I was feeling like the show was well covered, and there was no way the show was gonna satisfy me, despite the awesome lineup.

Natalie tried to keep me at the show, but after about 20 minutes of waiting for TV On The Radio, I was over it. I skipped out on and made my way to the Casbah for Electric Six. I ran into Tim Mays at the Casbah and he asked if I was a fan of the band. "No, I'm a fan of the Casbah." And that was the truth. I got there late into their set and the show was fun, loose, and the sold out crowd wasn't lost on the band. "You all could've been seeing TV On The Radio tonight, but instead you're here. And we appreciate it." It turned out to be a fun night, I guess I needed an energy/vodka infusion to let me really relax and release.

And it was nice to be called again early the next day for some more family time. It was a nice fall day, a bit chilly outside (unlike the past week that has felt hotter than summer) and I got to run around my sister's neighborhood with my niece who will climb any set of stairs that cross her path. It was chilly enough that we put her back in her halloween costume to keep her warm.

Oh, and there were so many things I planned on doing on Sunday, but I was abducted by my family. I wanted to see Elf Power at the Casbah, but my dad guilted me and I ended up hanging out with my parents and we went to Harrah's Rincon Casino. They talked me into it with the promise of dinner, some play money, and $2 Oktoberfest pints of beer. When you're unemployed, you can't really decline the offer of dinner, cash, and beer. So I went and though I love going to shows and going out, there's something really cool about sitting at a sports bar, playing video poker, and drinking $2 pints of Paulaner and Warsteiner with your mom. And with that, the weekend ended and it was time for me to get some sleep and prepare for the SD:Dialed In 2 year anniversary show.

Email ThisBlogThis!Share to TwitterShare to FacebookShare to Pinterest
Labels: 4th and B, delta spirit, family, FM 94/9, personal, the dirt bombs, tv on the radio