I've been sick with pneumonia and haven't been out or had a drink in nearly two weeks, so just about any news is good news, but this is perhaps the best news I've heard all year. I've always wanted the Casbah to have a ticket outlet, and when I was hired at the North Park Theatre, we tried to work out a deal, then it was bought by the Observatory and they used a different ticketing company, so we could never quite work out a ticket outlet. So anyway, a new record store, a new place to pick up Casbah tickets, and I can only imagine, a great new spot for in-stores or listening parties or acoustic performances. We shall see. In the meantime, here's the big news:

Eric Howarth of Vinyl Junkies is proud to announce a new partnership with Tim Mays of The Casbah in the Vinyl Junkies venture.  The mobile record shop and bi-monthly record swap (held at the Casbah) has been in existence for over 4 years, and will now add a brick and mortar location to its repertoire called the Vinyl Junkies Record Shack!

Located in the heart of South Park at 2235 Fern Street, directly across the street from the Whistle Stop Bar, the Vinyl Junkies Record Shack will bring music retail back to the neighborhood.  After lease issues forced Howarth’s former shop, M-Theory Music, to leave South Park, it is with excitement that we come full circle back to this unique and vibrant, independent community. 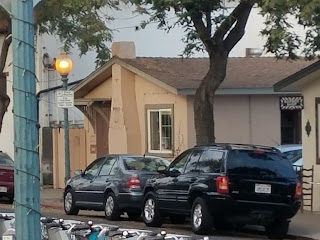 The focus of the record store will be on used records and cassettes, with a selection of new reissues on vinyl across all genres.  From Funk to Punk, Soul to Garage, Jazz to Heavy Metal, and everywhere in between, the Vinyl Junkies Record Shack prides itself on having a knowledgable, friendly staff who can turn the most discerning collectors or those new to the vinyl world, on to their latest favorite album.

The “Record Shack” will also be the exclusive ticket retailer for Casbah shows, with minimum service charges, and will carry other useful items for the neighborhood like guitar strings, turntables, vinyl cleaning/collecting supplies, and related items.

The store will celebrate its Grand Opening on Record Store Day, Friday November 24th, with festivities going on through Saturday the 25th. Special guest DJs and bands will be performing, drinks and food will be had, and thousands of records will be for sale.  Further details will be announced soon.

Vinyl Junkies is also actively buying record collections for the store.  Those interested with records to sell can email records@vinyljunkies.net or call 619-816-1830.

We look forward to talking further about the Vinyl Junkies Record Shack and know your readers/listeners/viewers will take interest in not only the store, but the recent resurgence in the vinyl record format!

UPDATE: Check out this more in depth article on SoundDiego about the partnership.

-Tim Mays has been a pillar of the San Diego music scene for decades.  Having started promoting punk rock shows back in 1980, that passion has continued with 29 years of owning and operating the city’s most beloved venue, The Casbah, and putting on larger shows at various venues by Casbah Presents.  Mays has also added “Restauranteur” to his resume, as co-owner of awarding winning Mission Hills restaurant Starlite and Golden Hill cafe Krakatoa.

-Eric Howarth’s involvement in the music world has been extensive as Founder of Vinyl Junkies & M-Theory Music, Record Label Owner (Hi-Speed Soul), Band Manager, Tour Manager, Concert Promoter, and DJ.  In the past few years, Howarth has followed a new passion in the film industry as Cinematographer for the Records Collecting Dust II documentary (to be released early 2018), filming music videos, shooting live bands for SoundDiego on NBC, and taking on roles in various short films. Howarth’s current project focus is a documentary based TV show he co-created and hosts that will soon be pitched to the networks, along with his involvement in the feature length film Fanboy.
Posted by Rosemary Bystrak at Thursday, November 02, 2017