You might recall that Darren and I visited his mom this summer. It was our first time going without Nova (she was in St. Louis) and so it was a true vacation in that we'd spend days with his mom and nephews and then had the nights to run around the East Bay/Oakland/SF area. One of the things he really wanted to do was meet up with his old band. 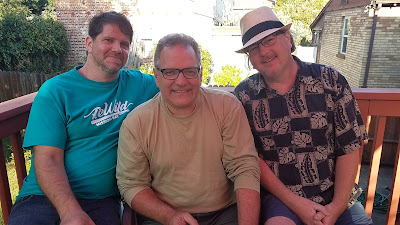 So the really quick history is that Darren was in a band called groove pigs back 20 plus years ago. Darren and Joe Heavey went to high school together and played music for years, and then had rehearsal space adjacent Dan Jewett, with whom Darren went to SFSU, and eventually they formed groove pigs as a fun side project from all their other endeavors. I'm not exactly telling this right, but they all moved a lot, had different bands, blah blah, but they were a party band and played house shows and bars and clubs and art spaces and basically anywhere they could at the time. But then life happened and they all moved on.

Darren resurfaced in San Diego and then little by little they reconnected over the magic of Facebook (though Dan and Joe live just a short distance from one another), thought they should start tooling around with music again, and became an internet project, each recording parts and sending them to the others to record. They have a whole record of original songs. (By the way, you should check out Dan's other project, My Little Hum.) I don't know what will become of it or if they'll release it or whatever, but while we were in the area, the guys all played together in the same room at the same time for the first time in at least a couple decades and many craft beers and shots of tequila were consumed and it was awesome. One day they'll let me release those videos.

In the meantime, Darren has a Halloween tradition, playing the very complicated "This Is Halloween" with Nova, and so this year, the band decided to give it a whirl, and the mix came in after midnight, but we wanted to share it (you can even hear Nova singing in parts). The b track, Throne Games, is their twist on the opening them of the show (duh). I promise I'll be sharing more as they let me, but it's just a fun project for them, and I'll let them dictate how they want it shared with the world.