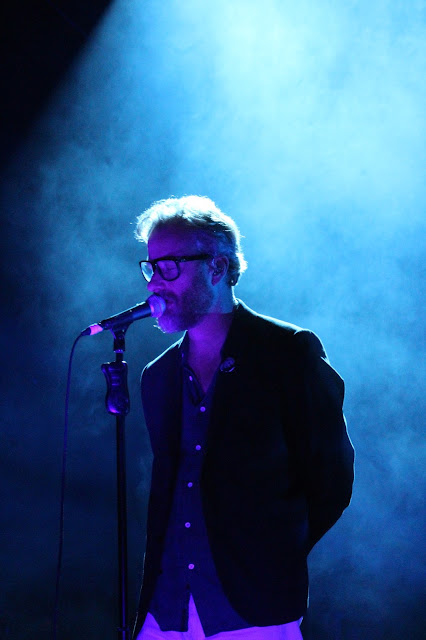 The past few weeks I've had a ton of photo passes which means I'm backlogged with gigs and gigs of photos. In three songs at The National, I shot 405 photos. And I've been a little shy about posting because I'm slightly intimidated by the far more talented photographers in this town and their amazing gear that isn't filled with scratched mirrors and spotty sensors and image dust bunnies, but Darren gave me a pep talk, and I get some incredible access to shows that not a lot of people get, so I promise as things start to slow down as we get deeper into fall, I'll get around to posting more photos. I'm on such a high from Thursday night that I wanted to get these pics of The National up right away. 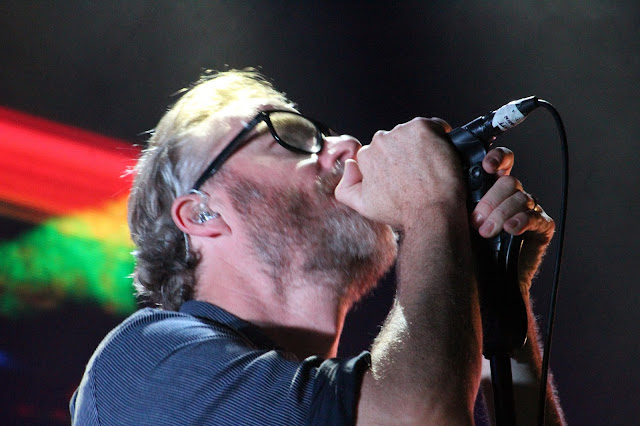 Thursday nights are tough because we have soccer practice in PB until 6, which means by the time we pack up and leave the area, it's 6:30 and the 5 south is in rush hour. Jeff and I made arrangements to meet at Tribute before the show. I should've studied the menu and pre-planned my order, because that place is busy. It was delicious, but not somewhere to go if you're in a rush. As it was, we had to take my pizza to go when it was finally ready, dropped it at my house, then made our way to SDSU. I had a photo pass, but arrived during the fourth song from Daughter, so this was the best I could get from my point and shoot from my seat. They sounded fantastic and were a solid choice as an opener. 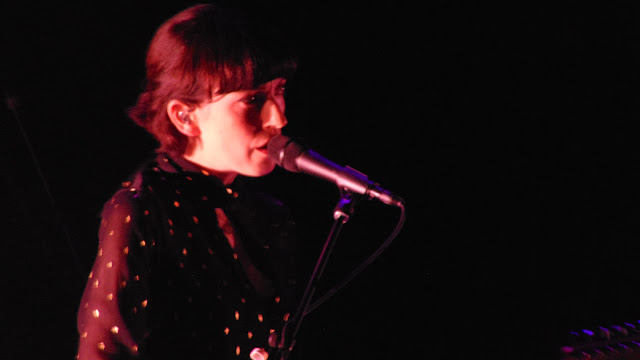 Oh. This is a funny little side note about the photo pit. I haven't shot at OAT in several years but I have a pretty great relationship with Casey from LiveNation. I'd texted her that I wouldn't make it for the opener because at the venue, everyone has to meet at the top and get escorted into the pit. Except when we got to the pit, the band had dead cases piled and taped to the part where we get in. So imagine a dozen photographers, climbing up the cases and jumping the four feet down into the pit. One girl was seven months pregnant and wearing a dress! It was pretty funny and I was super glad that I always opt for comfy and sensible clothing choices. Getting out was even more hilarious because there was no step up, so you had to be an acrobat climbing out, unless you're flexible yoga girl Kaitlyn from 91X who basically vaulted over in one beautiful, graceful motion, making all the rest of us look like assholes. 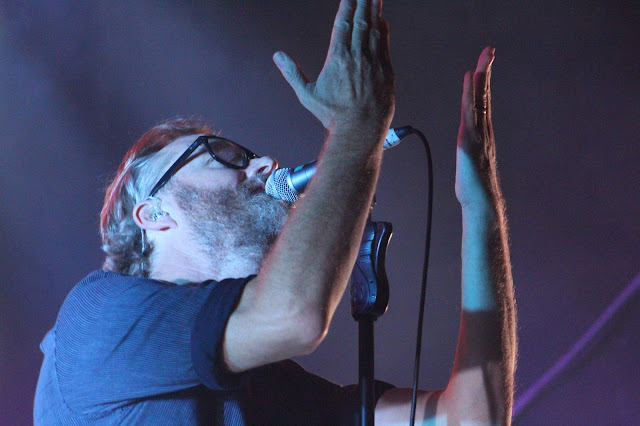 I don't know what to say about The National. All told, I've seen them live about half a dozen times, they're always amazing, and I have nothing but love for Matt Berninger. We've been dealing with Nova being sick, girls from our soccer team being sick, and hearing that hacking cough everywhere you go, so when I saw him coughing during the first song, even at times into the mic, I couldn't help but feel sad for him, but also what a superhero to power through when you feel like shit. The setlist was a beautiful mix of new stuff and favorites. Matt had his bottle of wine to help him get through it, but his throat and voice were definitely strained where you'd expect them to be. You can see eight videos here.

Still, raspy voice and all, it was a beautiful night in San Diego. Matt was charming and funny at moments, and had a few "Fuck Trump" moments, as well as attributing "Walk It Back" to Karl Rove, "but he keeps refusing the royalties." On my way out of the pit, while waiting for everyone to climb out, I got a lingering high five/handshake from Matt and I felt like a girl whose junior high crush finally said hi to her. Toward the end of the night, Matt joked about playing Eminem, so the band finished the show and walked off stage, the stadium lights came up, and the snarky soundguys played "Lose Yourself" which brought Matt back out onto the stage as stagehands all around him worked, and he pantomimed Em while shaking hands of fans and giving out setlists. Matt Berninger. He's just like us. A man of the people. Swoon. Tons more photos after the jump. 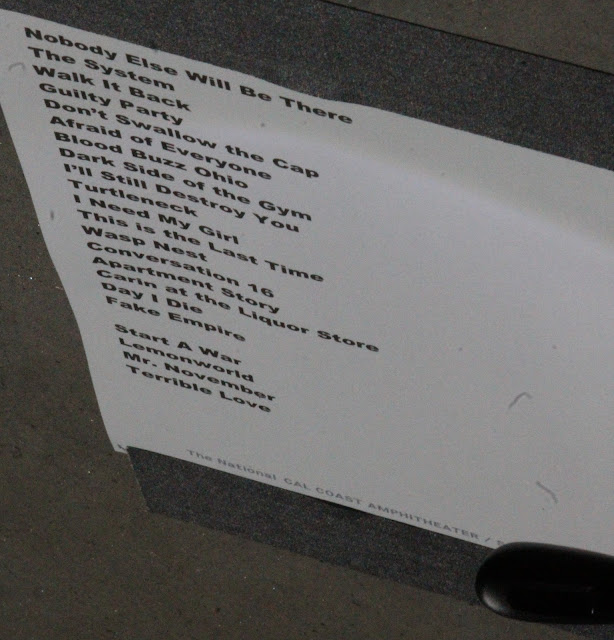 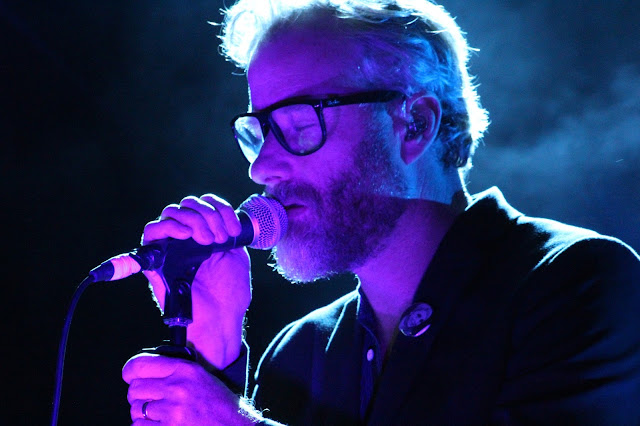 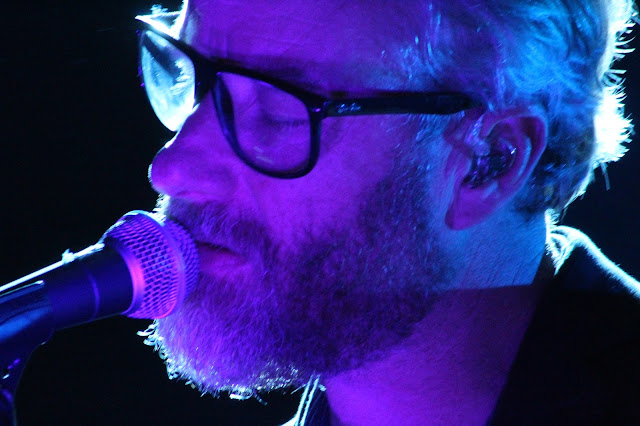 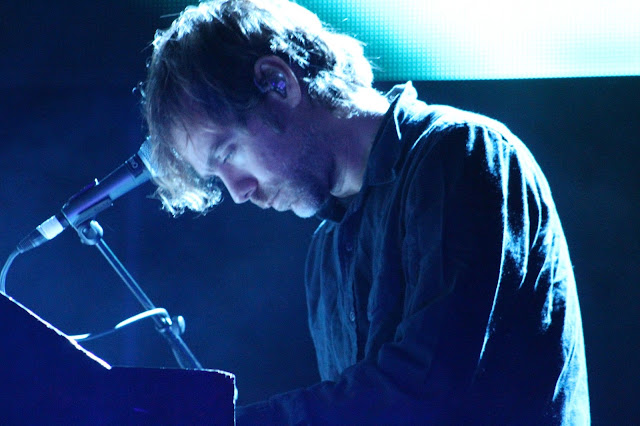 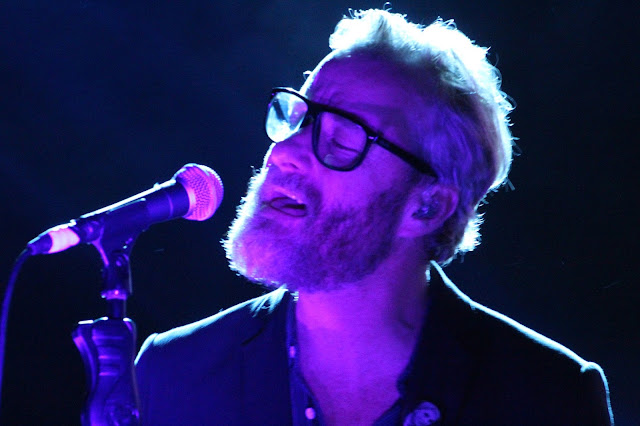 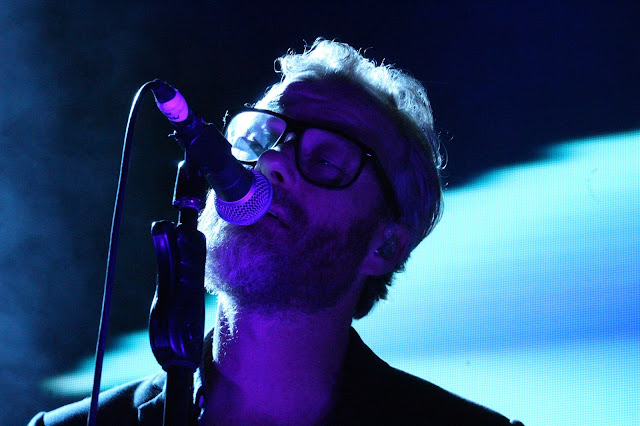 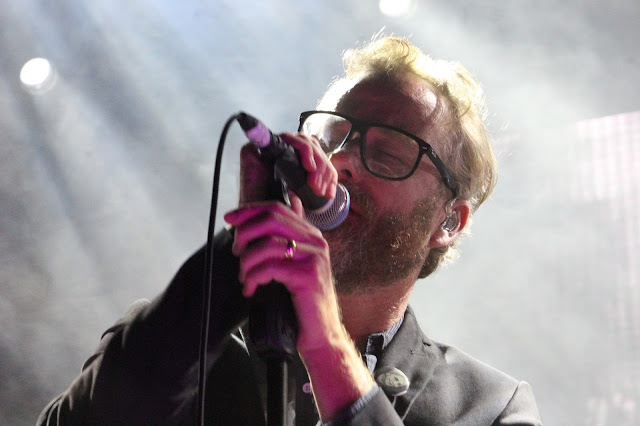 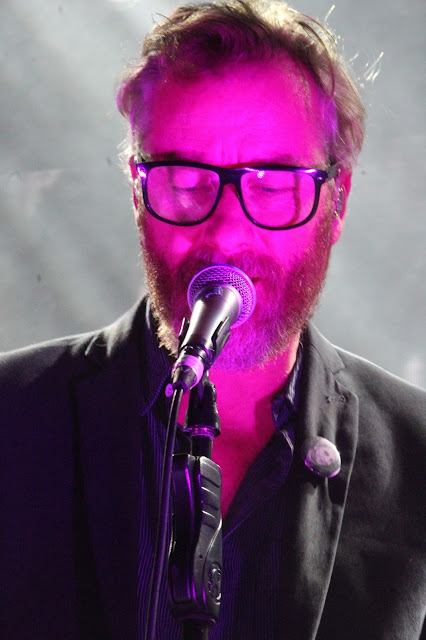 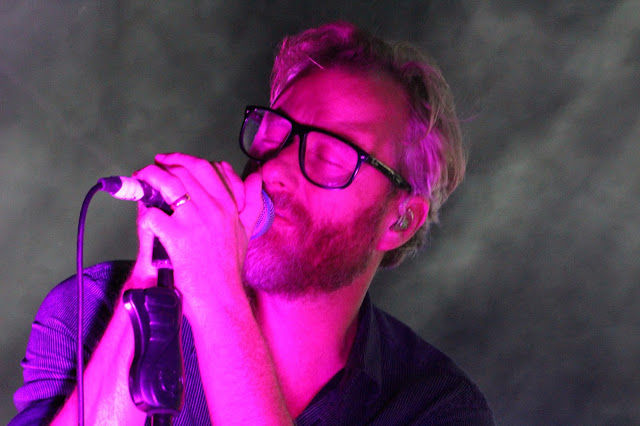 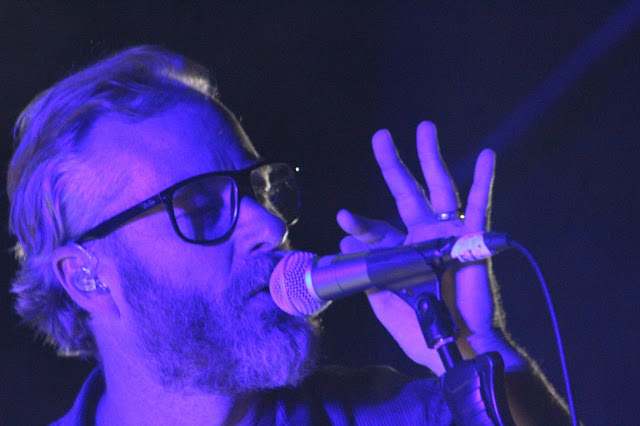 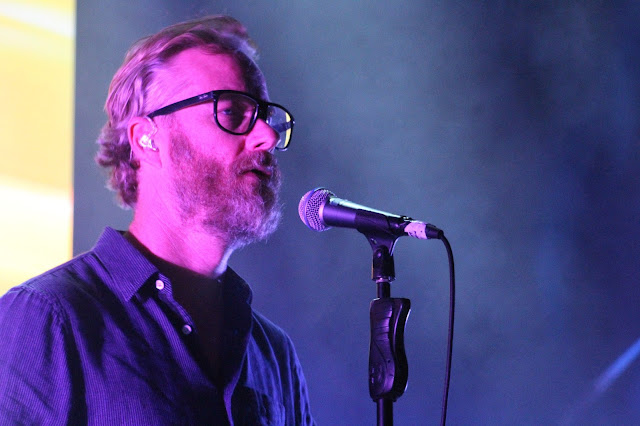 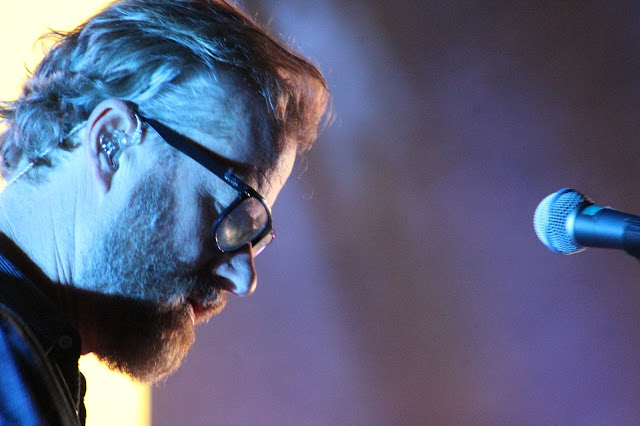 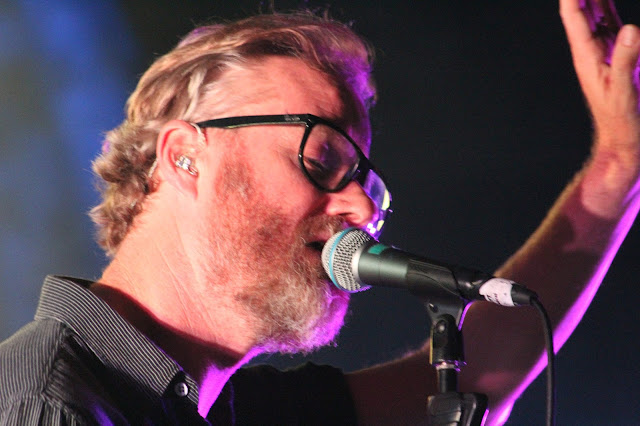 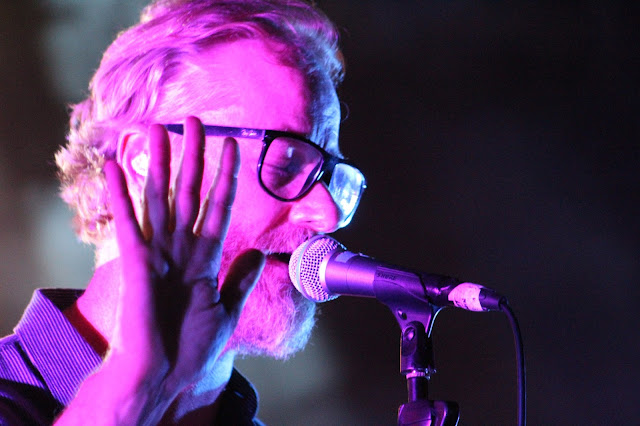 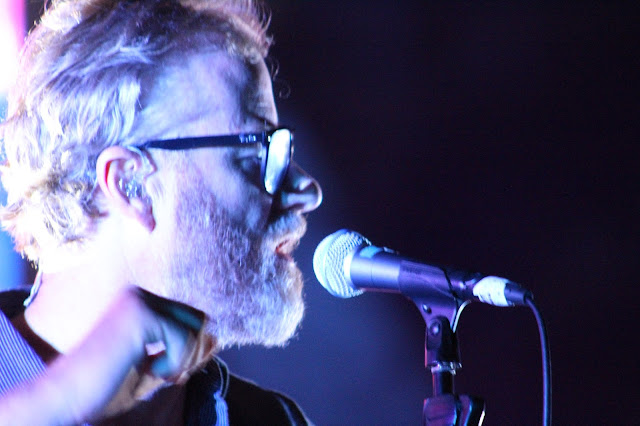 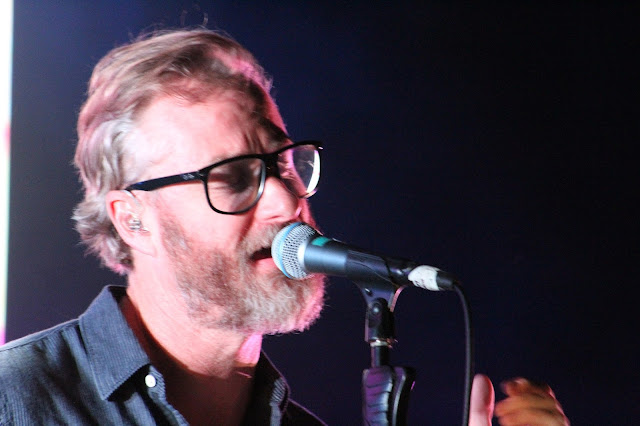 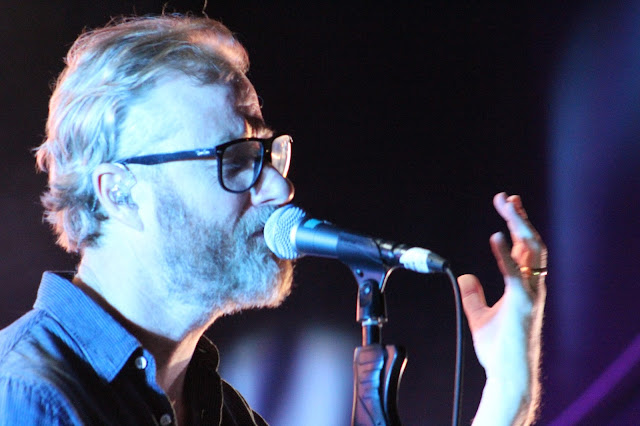 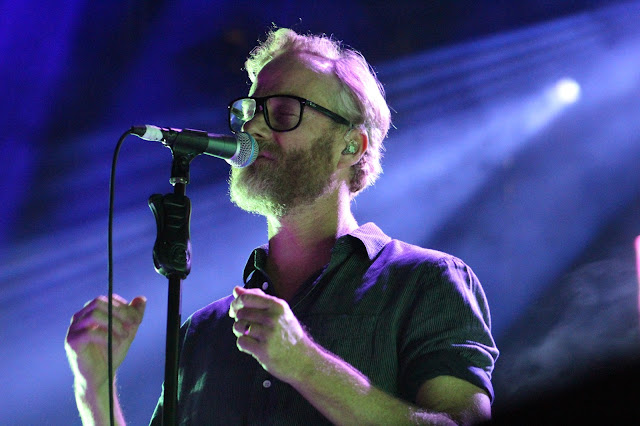 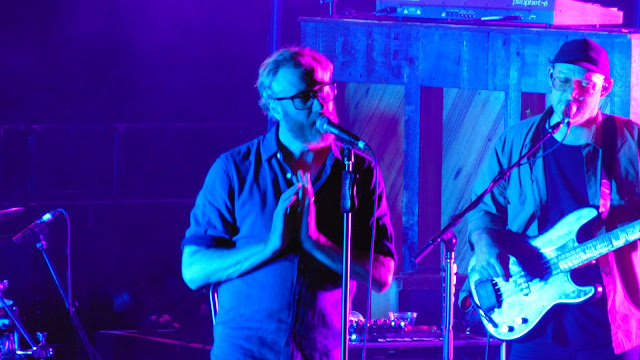