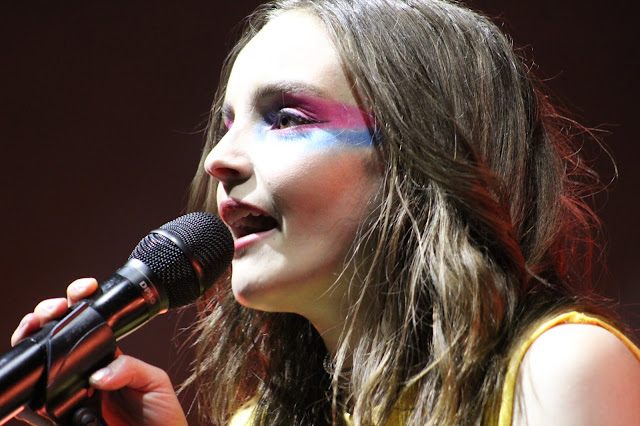 What a week! September is my favorite month of the year, and not just because it's my birthday on Friday. I share the birthday month with both my mom and dad, so we definitely get a lot of family time and lots of cheesecake, too, There are also typically a ton of great shows. I laid low and tried to catch up on work the early part of the week but on Thursday, we got a Chvrches double header with an afternoon X-Session and then caught them at the OAT that same night. On Friday, I worked at the Dodie show at the Irenic, then went to the SoundDiego party at Soda Bar. While Darren worked on Saturday, I took Nova to California Center for the Arts Escondido to see a film called Lost Rivers and do a creek stroll with the San Dieguito River Conservancy. I should also mention the Levitt Amp Series was going on with Euphoria Brass Band and it's a rad and FREE concert series every weekend with bands and food trucks and local artisans. I opted not to go out on Saturday, instead binging season 2 of American Vandal on Netflix. On Sunday, we celebrated my mom's birthday with a small gathering, then I worked at the Irenic for the Hannahlyze This podcast which was thoroughly entertaining. This week, I'm trying to catch Liz Phair and Speedy Ortiz tonight at the Belly Up and First Aid Kit and Julia Jacklin on Tuesday at the Observatory. My Wednesday just opened up, so hoping I can score a photo pass for Houndmouth at the Observatory with Family of the Year, and also catch The Boxer Rebellion at the Casbah the same night. I'm hoping Thursday we can do something fun like the Safari Park or the Zoo before going to the Casbah for Tim Fears' birthday celebration, and Friday, for my birthday, I'll be shooting Devotchka at the Observatory and then probably tying one on at the Ken after. I'm going to try to spend a lot of time at the Adams Avenue Street Fair, catch Lil Hurry Saturday night, and then wrap my weekend with Conor Oberst on Monday if I can track a photo pass for that one. It's a lot but my love for this time of year will hopefully power me through. Full listings through Monday are after the jump.