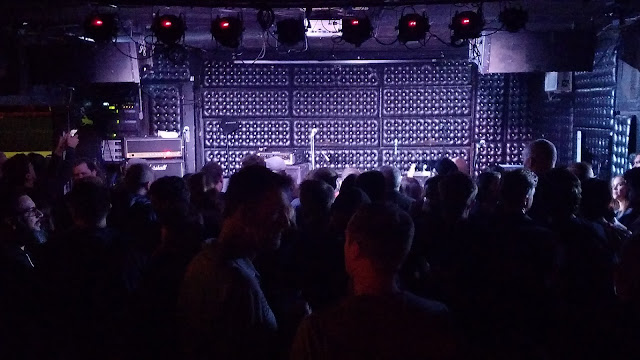 I was in the middle of a regular post when I realized it was time to do listings so I powered through and got them done even though I very easily could've been in bed by 9pm on Tuesday night. The regular post will have to wait a day. I had a really great week -- on Thursday we got to go to the media party for The Sound, which was super cool and spacious and looks like it's going to be a great place for concerts, though don't let the seating chart dissuade you, the balcony is much closer to the stage than indicated on the map.
Having four sold out nights in a row at the Casbah on a three day weekend let me actually enjoy my weekend - I bounced around Sea World and the Zoo and went to La Jolla Cove and did some shopping and did my thing all weekend long; Darren's weekend shifts were cut due to the crazy ass weather, and after having to drive to Chula Vista in that weather to help out my parents, I was toast and didn't make it to Transfer on Saturday night. We'll just have to book them again soon, right?
Darren did work at the park on Monday, so I spent the whole day at Sea World for their Inside Look weekend which was pretty cool, but naturally Tuesday was a beast for work coming off that long weekend. I still got my zoo walk in, and Darren started a new additional part time job that allowed him to come meet me after. I'm excited to talk about that but I'll wait until he's locked in before I spill the beans. I'll just say that I texted him in the middle of the day to ask how it was going and he responded, "I found my new calling." Love that.
So listings are done and I want to go to a couple shows this week, but we'll see how the weather abides. Since I won't drink and drive, not even a sip, and have sworn off ever using Uber or Lyft ever again if I can avoid them, getting out and around is a little bit logistically challenging and takes a lot more motivation and planning. So no guarantees. But at least I have the Zoo.
If this rain continues and you've discovered that all your umbrellas are missing or broken (as I did), the Big Lots in La Mesa has a ton, plus rain ponchos for only $1.19. I hit up about 15 stores all over San Diego, so trust me on this. That's the spot.
Stay safe out there.