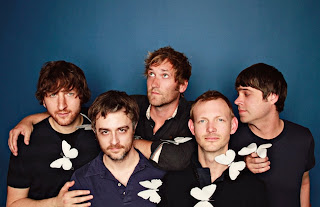 Seattle five piece indie rockers Minus the Bear will be making their next San Diego appearance this Wednesday on the campus of UCSD. The Band released their fifth full length, Infinity Overhead, on Dangerbird Records last summer. Many have described their sound as math rock with the unexpected time changes. There is a certain precision to the overall effect, with guitar riffs filled with pleasant vocals throughout. Earlier albums focused more on the electronic aspects of their music, so one never quite knows what to expect. What is readily apparent is a band that is always searching to improve and add to their kaleidoscope of sound.

Minus the Bear recently finished a European tour and this headline show is one of only a few on the West Coast. Fans will be treated to a band that has found its stride and is clearly capable of delivering in the live setting. The show will be taking place at Price Center Ballroom West. Tickets can be purchased here.

Watch a video of Steel and Blood below.

Email ThisBlogThis!Share to TwitterShare to FacebookShare to Pinterest
Labels: minus the bear, ucsd