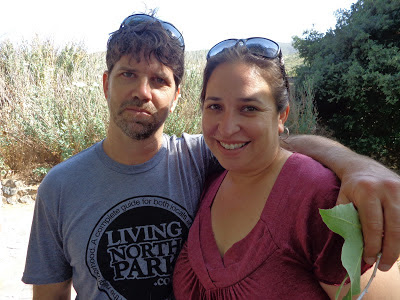 I have to say it was a very, very good week. I posted that really long diary post a few days ago, but I'd rather not get so backlogged and since I'm awake and somewhat alert and avoiding my inbox, I feel like sharing.

I feel like my vocabulary is so limited these days. Amazing and epic and great and beautiful and exciting seem to be so overused in my posts lately, but when I think about how I was a year ago, dealing with my eviction and moving, I was a total mess, completely depressed, and living in a constant state of anxiety. I was binge-living. Binge eating and binge drinking and binge sleeping and binge working. It wasn't pretty. Since then, work fell into a better place with a Casbah promotion, regular site sponsorships, and it turned out that my eviction was a total bonus because I'm so much happier in my current location than I was in Kensington. And of course, Darren. There's something pretty amazing about meeting someone who is my partner in every way- supportive and kind and loving and funny and smart and an incredible dad and generous boyfriend and no offense to anyone who came before, but this love is completely unprecedented in my life. After 8 months, none of the glow has worn off. Read the post after the jump. 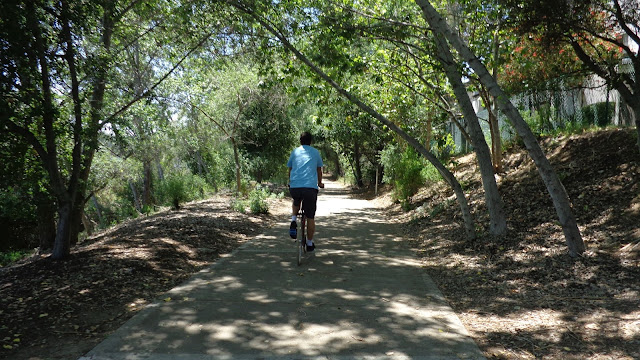 Since I'd gone to OC on Friday and Darren worked until 4am, we were up until sunrise, so it was awesome sleeping in on Saturday. We kicked off the day with breakfast in bed then made our master plan for the day. We loaded our bikes in Darren's van and parked in Mission Valley at Qualcomm Way and Mission Center Road. We jumped on the north river path and began our 8 mile ride to ocean beach. There are parts of the ride that aren't so pretty- like the part from the Town and Country to the baseball fields, but overall it was an incredible ride, even against the wind. By the time we arrived in Ocean Beach, I felt like a lifetime of toxins had poured out of my body and it felt incredible. 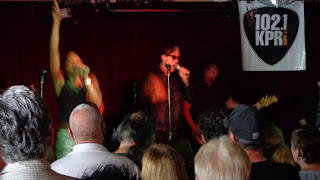 We went to Winston's, where Fitz and the Tantrums were playing a KPRI private listener show. Fitz was kind enough to add me to the list and they played a great hour set of new music mixed with older hits. It was a really good time and the place was packed. We hung around afterward to catch up with some friends and say hi to the band before we headed out to grab lunch at Pizza Port for their 3 year Anniversary Party. 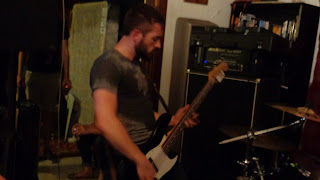 The ride back to the van was really easy with the wind to our backs, and though it turned overcast in OB, by the time we passed Sports Arena the sky was back to blue. We rode the south river path back  which was really pretty, too. We loaded up our stuff, dropped home for showers, and Darren was off to work and dropped me off at a random house show on Adams Avenue. The house is by the Texas Street Bridge and my friend Ben from San Francisco, formerly of Low Red Land, was playing with his new band Minot. The living room was small, and there were maybe a dozen people who filled the room. After Minot, Cash Crop played and I hung out for awhile until Michael dropped me off at home.

I did a couple hours of work, then it was back on the town. I missed Pyyramids at Bar Pink, so I headed down to the Casbah for Octa#grape, Rafter, and The Donkeys. Super fun night and I closed it down at the Ken Club and waited up until Darren got off of work. 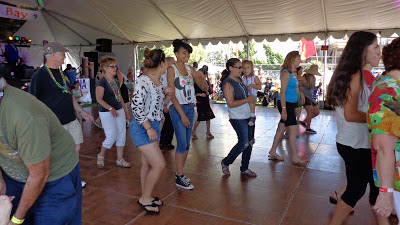 For Mother's Day, we loaded up the bikes and a picnic and drove to Liberty Station. There's a really great bike path over there that rides along the bay and crosses over to Shelter Island. We ran into two problems. I couldn't find my keys to lock up (I found them later at home) and Gator By The Bay security was telling us we couldn't park along the fence. Kinda bullshit and we were kinda fuming that an event that actually blocks a bike path didn't have a plan for bikes, but after a tweet from them that they'll plan for bikes next year, I let it go. Darren rode the bikes back to the van and walked back and joined me, my mom, my sisters, brother in law, and my nieces for a day of fun Zydeco music. Around 5, Darren left to work and we stayed for awhile longer before we called it a day and went to my sister's house.

After a couple hours with my nieces, Darren picked me up to take me to UCSD for Cloud Cult and JBM. He expressed that the night was beyond slow, in the three hours he'd been working he hadn't picked up a single fare, so I convinced him to just take the night off and stay with me for the show. Cloud Cult and JBM were great and though I didn't take home the silent auction art piece that was painted throughout the show, I picked up a couple CDs and we came home and had a couple beers before calling it a night. 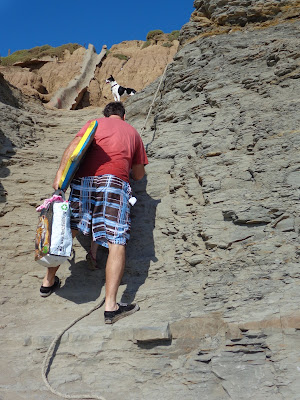 On Monday I got a couple hours of work in until it was time to pick Nova up from school. It was hot as hell, so we decided to pack up some snacks and beach gear and head to the coast. I recently bought my first bathing suit in a dozen years and was ready to enjoy the Pacific. We went to the Sunset Cliffs lot under Point Loma Nazarene and hiked down to the secluded little beach that requires a short  rope repel. I'd never been there before and it was great. The water was warmer than I expected and very clear. There's a shallow shelf that drops in certain spots, but it was a great spot to become reacquainted with the ocean. After a while towing Nova around on the boogie board, we packed up our things to go to the even more secluded beach. There's a cool little hike through a narrow canyon, past little caverns where college kids drink and smoke pot and tag the rock walls and play on a rope swing, until you arrive at the other very secluded beach. There are some brutal toe-stubbing rocks in that part, but it was still a blast to play in the waves and walk on the flat long rocks out into the ocean. We had a blast playing in the water until about 6 when we were all starving and hiked back to the car. We had dinner and then came home to clean up and hang out watching Brave until Nova's bedtime. I got home after midnight and ended up working until sunrise just so I could free my days for the rest of the week.

With about two and half hours of sleep, Darren picked me up for a meeting with a friend about a possible business venture we might jump into this summer. I don't want to get into it too much, but if it happens, you can be sure you'll be hearing about it first. After the meeting, we picnicked at Lake Murray while we waited for Nova to get out of school. The weather wasn't quite as hot as Monday, but she has minimum days on Tuesday, so we were excited to head to the coast again. We went to Ocean Beach, where it was sunny for awhile and then quickly changed to overcast so after a couple hours we called it a day. Nova had earned a reward at school for good behavior, so we went to Toys R Us and Target on the hunt for a dinosaur toy she'd been asking for, then went home for dinner and chill time.

Wednesday was another great day, with Darren over in the morning, my Casbah meeting, lunch with Pyles at The Local Habit, and then a few hours of work until Darren came home from Nova's art class for our #24HourDate. The last Wednesday night we had was kind of a bummer, but this one more than made up for it. We packed up our bikes and joined The Silent Ride in Clairemont. It was about a 10 mile bike ride to areas where cyclists have been injured or killed to raise awareness for bike safety. We felt slightly ostrasized from the group with our casual bikes and lack of helmets, but it felt important to ride for Darren's dad, a man who I will sadly never meet. After the ride, we parked at home and walked to Tiger!Tiger! for Drinkabout, then walked to URBN for the launch of Living North Park, where we were gifted with awesome t-shirts. After pizza and beer, we went to Bar Pink for Stevie and the Hi-Stax, then dropped into Seven Grand for final cocktails before walking home and calling it a night. 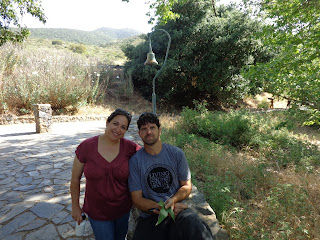 Thursday morning was a little rough getting up, but after tacos and burritos from Pancho Villa, we picked up Nova from school and went hiking at the Old Mission Trails Dam and Flume. It was so pretty and serene that we lost track of time. We grabbed a quick dinner, popped home for a minute, then Nova joined me at the North Park Festival of Arts final meeting while Darren ran errands. We went home and cozied up until bedtime, when I walked home and got some more work done, which get me to now, writing at 4am. 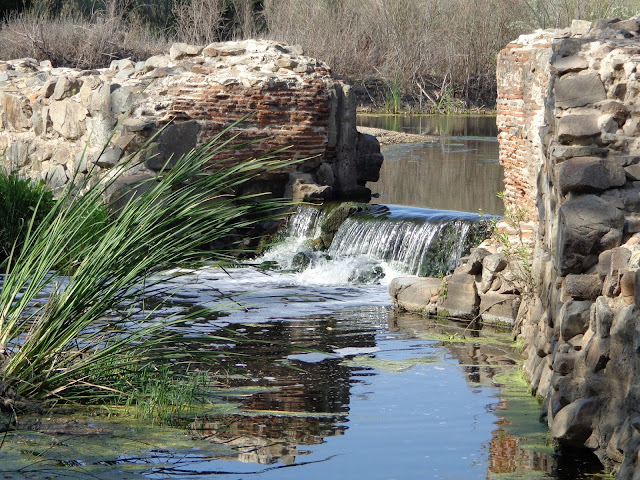 It's hard to believe what a complete 180 my life has taken in the last year and this everlasting joy just seemed so out of reach, but it's here and it's happening and I am happy to be taking the time to take stock and enjoy every minute as it happens. Except now, when I must sleep. Huge weekend ahead...