Friday Night: Make A Run For The Border With The Silent Comedy

My friends at Cantaloop Media are keeping busy south of the border. While we have a great music scene in San Diego, they're working feverishly to curate the same in Tijuana and I have to say, it's a bit cooler, edgier, with a DIY aesthetic, a feeling of community, and free from some of the limits we have here. Throw in a combination event with Turista Libre, and Friday night in Tijuana seems like a no-brainer. (An extra plug that Darren's Van will be working, so if you and your friends need to get from North Park, South Park, Downtown or wherever to and from the border, he's your guy.) Get your passports and head south!

Here's the deal:
The Silent Comedy
Madame Ur y Sus Hombres
Love & The Skull
Teenage Fiction
at Black Box (6th and Revolucion)
Tickets are 50 pesos at the door, ages 18+

For the Turista Libre package, you get

All for $20!! Buy your tickets to reserve your spot now! 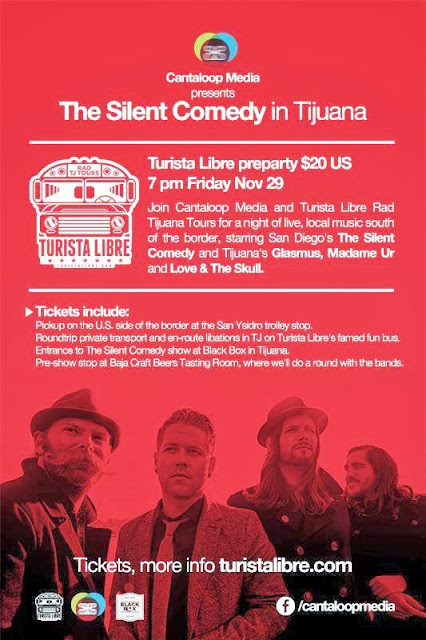