Today was a day of lots of concert announcements. Because of Coachella, a lot of acts have to keep their summer plans mum until after the desert debauchery is done, so with that in mind, today Arcade Fire announced a San Diego tour date on August 5, with tickets on sale Friday, April 25 at 10am.  FM 94/9 is presenting the show and will have tickets to give away on air, a presale password, and presumably tickets at their Random Acts of Kindness stops.

Way to steal our thunder, AF. 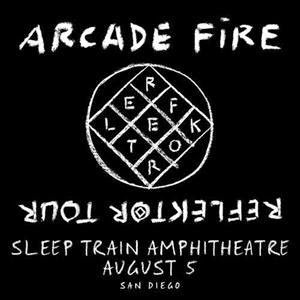 In the wake of—well in the midst of—a second Sunday night main stage closing set at this year’s Coachella festival, Arcade Fire has confirmed two new Los Angeles headline shows, August 1 and 2 at The Forum and one new San Diego headline show, August 5 at Sleep Train Amphitheatre. Local and Facebook Pre-Sale is April 24th from 10am-10pm PST. General On-Sale for all three new dates is April 25th at 10am PST.

As with every date on the worldwide Reflektor Tour named for the international #1 album, these two newly announced additions will prove unlike anything Arcade Fire–or any other artist–has ever staged in an arena setting. No two shows are alike, as any given night can find the band shattering the barrier between audience and performer, making red carpet arrivals, joining the audience in pre- and post-show dance competitions and more.


As for the performances themselves, the Reflektor Tour’s dazzling production, multiple stages, captivating visual effects, and sprawling setlists spanning the entire AF catalog plus regular surprises has been generating universal raves, most recently from last week’s Coachella headlining triumph:

"The curfew didn't stop the band from carrying on… Each member of the group grabbed an instrument (with Butler on megaphone) and weaved through the audience as the crowd sang the ’ooh, ooh, oh oh oh oh' portion of the show-ending single 'Wake Up.' The singalong carried on until the band eventually slipped away behind the fence, and even then a sizable crowd kept on ‘ooh ooh-ing' as the festival shut down around them. That's the way you end a fucking show.”—LA WEEKLY

"a nice reminder that dance music almost always sounds better onstage when it's coming from a big band, immaculately mixed… Arcade Fire's second Coachella headlining set did underline its status as maybe the most significant live rock band to emerge from North America in the 2000s.”—THE LOS ANGELES TIMES

"Arcade Fire’s lengthier performance was even more riveting and easily the best of the fest… They weren’t about to go gently into the good night, either, ultimately performing their stirring anthem 'Wake Up' well after the PA had been shut off... It was a fitting, prayerful finish to what almost felt like a religious experience... Arcade Fire transcended everything”—OC REGISTER

Transforming the world's biggest arenas into unique and locally flavored carnivals, Arcade Fire will continue to provide Reflektor Tour revelers with an evening like no other. Showing up early and staying late are recommended. For a full list of remaining dates, see below and continue to check back at http://arcadefire.com/ or http://www.livenation.com/