Synopsis:
On Saturday, June 21, 2014, at approximately 2140 hours, a lone adult female was walking on the 2700 block of Lincoln Avenue when she was hit from behind by two suspects. She was knocked to the ground and began fighting back. One of the suspects grabbed her clothing and attempted to pull them off. The female fought back and yelled for help. The suspects fled in an unknown direction and 2 bystanders came to the aid of the female. Neither the female nor the bystanders saw the suspects.

On Tuesday, June 17, 2014, at approximately 2330 hours a lone adult female was attacked by two males while walking on 3200 Meade Avenue. The female in this case also fought back and the suspects fled.

One suspect is described as a Hispanic male 28-29 years old, 6'0, wearing a hooded sweatshirt, and he spoke with a Spanish accent.

The San Diego Police Department recommends that women in the area be aware of their surroundings and not walk alone. Investigators have been working both cases throughout the day and will provide additional information when it is available. 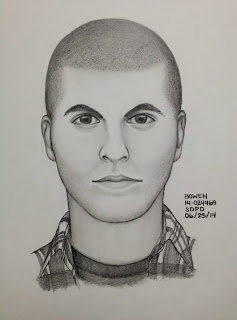 (June 22) Last night on Lincoln, in between Idaho and Oregon st. in North Park I was walking home by myself when I was suddenly pushed to the ground from behind and immediately began taking punches by [what felt like] two men. They unsuccessfully attempted to sexually assault me while beating me then fled. I was sent to the hospital and was told I have a fractured nose, my right eye was swollen shut until just a couple of hours ago, the police, nurses, and doctors think I was dragged due to road rash, along with third degree burns from the soup I was carrying. Both of my hands are badly bruised. I look like a completely different person right now.

I'm not the only woman this has happened to, rather the sixth. This happened three blocks from where I live, the woman before me was assaulted on the 17th of this month. TUESDAY. I want everyone in the community to know this is happening, especially all of the women who live in my neighborhood and surrounding neighborhoods. Please keep an eye out for one another and be safe. I love you all so much.