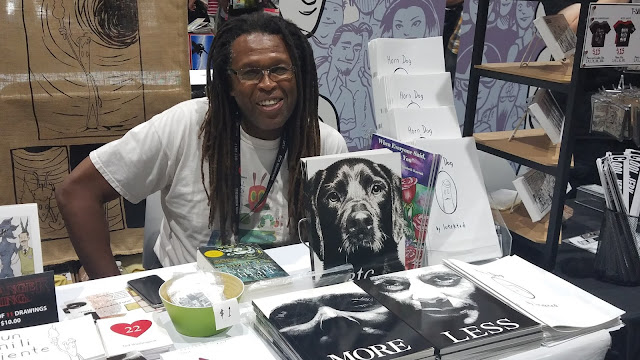 I promised I would try to update the listings daily, so here ya go. Preview night was awesome. Pyles and I arrived a little after 3pm and had no trouble parking. We went into Mission Brewery for "a beer or two" but then found out the beer we were drinking "hoppy pilsner" was only $2. So we ordered more, but then the keg blew, so we switched it up, then we ran into Gabriel from Digital Lizards of Doom, he ordered us another round and then settled our whole tab! Super nice. And then the Jet Pack Man did a demo outside (blowing spent beer grain into everyone's eyes). By the time we finally made our way to the Convention Center, I had a nice little buzz, we quickly procured our badges, and then wandered the floor. Pyles always goes off on his own, so I had fun slowly perusing the aisles, buying some things for the girls, taking the time to read books or look at art. It's always good to see local artists, like my friend and Casbah co-worker Ted Washington at his Puna Press booth. Swing by and say hi and check out his amazing art. Archived listings are after the jump.