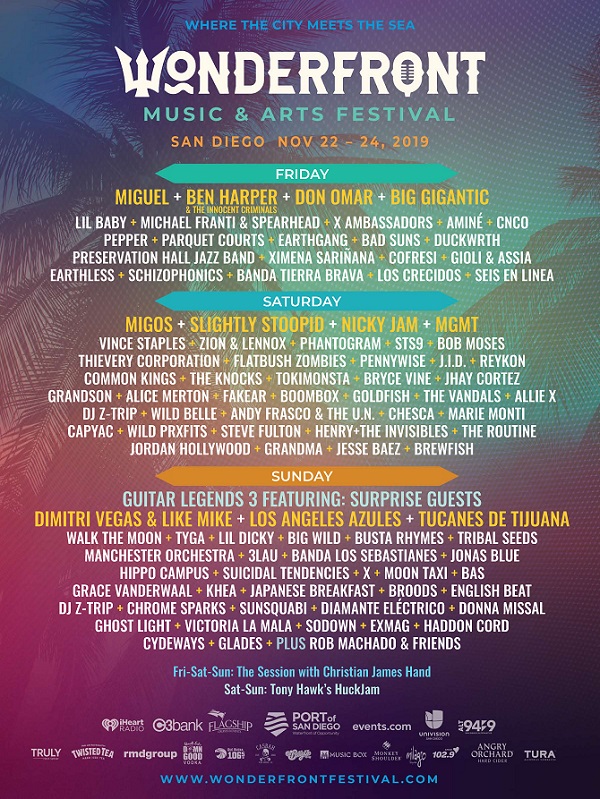 I worked through the night, and then when I was finally ready to go to bed, of course what I'd been waiting for finally came through and I'm glad I check my email one last time before getting some sleep. Today, Wonderfront added the final artists to the lineup as well as publishing the breakout of bands by day.

Wonderfront Festival will take place November 22-24, 2019 at various locations along and around the waterfront area. Tickets and details are available here.

For your information, full press release after the jump.

Guitar Legends 3 will bring some of the best guitarists on the planet and an All-Star Band to the Wonderfront stage on Nov 24th. Presented by America Salutes You, the broadcasted concert event will be filmed live and air as a holiday special to raise funds for veterans and first responders charities.

Wonderfront co-founder Paul Thornton states; “Our goal with this lineup was to have it stacked from start to finish each day with great artists. It’s hard to really call any certain bands our so-called headliners as so many lines of bands on this festival are all headliners in their own right. We’ve had a tough time choosing between so many talented artists across the many genres into the finite number of stage slots available. We also wanted a great mix of artists across the time slots, so that not all the bigger names were just playing at the same later times. We really appreciate the artists that have worked with us to make that possible. And since announcing the response has been fantastic, and many more artists have approached us and that is why the number of artists keeps growing, plus we are still booking the artists for the boat parties and the Silent Disco DJ sets.”

“I’m excited to bring back the Huckjam format (choreographed and freestyle skating with live music) after 10 years of hiatus, and there is no better place for it than my hometown. I’m proud to be involved with Wonderfront, and it’s been a blast helping handpick the legendary punk bands for our stage.” Tony Hawk, Wonderfront Festival Partner.

Rob Machado and Trevor Hoffman, who, like Tony Hawk, became involved in the festival early on as investors and ambassadors are thrilled with the caliber of the lineup and the mindful approach that was taken to get it to where it is today. Plus Rob is inviting some special friends to jam with him on Sunday, as Rob Machado & Friends.

Recently publicized partner, Miguel, announced he will be getting involved with creative activations and marketing, to promotion and performing, including hosting a think-tank dinner that includes a mix of world-class artists and leading entrepreneurs who are Founder/CEOs from the business world, to explore and discover new creative opportunities.

Miguel adds: “It’s an opportunity to highlight the unique energy and charm of San Diego. Being born and raised in SoCal and spending lots of time in SD, it all feels very natural and I’m excited to contribute both as a stakeholder and performer!”

Festival co-founder Ernie Hahn summarizes; “This event is for San Diego, by San Diego, and takes the best of the Wonderfront and the Gaslamp at a time of year San Diego needs a big event to bring us all together. All of San Diego and the greater Baja area are represented with the genres of music, food, art and experience Wonderfront will bring to the world November 22-24, 2019. We are really stoked for San Diego and will be working with everyone to make this an incredible city-wide celebration!”

Tickets are on sale now on the Wonderfront Music & Arts Festival website. Those who subscribe to the WonderLIST at WonderfrontFestival.com will have access to exciting festival updates, news, information, and a chance to win the WonderFULL Life all-inclusive VIP package.

About WONDERFRONT Music & Arts Festival
A highly-anticipated 7+ stage, 95+ bands, 3-day music, culinary and arts festival will descend upon the stunning waterfront of downtown San Diego from Broadway Pier to the Embarcadero Parks. The festival offers diverse attractions including yacht parties, water sports, art installations, after-parties, a craft beer village and plenty of local flavors. Wonderfront festival’s re-entry policy encourages festival-goers to customize their weekend experience and truly integrates the city into the fabric of the festival. In its inaugural year, Wonderfront will synthesize the city and the sea in a way that no music festival has ever done before.

About Wonderlust Events, LLC
Based in San Diego, Wonderlust Events llc is an innovative events and entertainment company focused on conceiving, creating, and executing impactful, music-based live experiences delivered across multiple mediums (theatrical, traditional, and streaming broadcast). Its founders, Paul Thornton and Ernie Hahn, each have over 20 years of experience in large-scale event promotions, production and creative development.