I've been working through Christmas movies, so I have another post in the works for those, but I'm killing time this morning so I thought I'd stop lollygagging on all my draft posts. So there are a few new things I've watched and read and you can read about them after the jump.

"Nobody has any authority on the fucks other people give."
-"The Testaments" Margaret Atwood 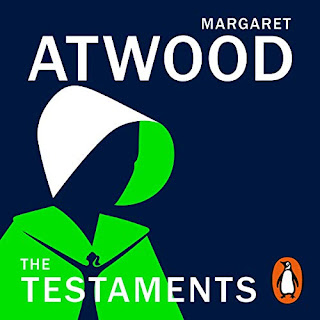 Listen: I think I mentioned that I finally finished The Testaments by Margaret Atwood. I love my library apps and feel lucky that where I live, I can have cards at San Diego Public Library, San Diego County Library, and the Chula Vista Library for good measure. In this case, I had put myself on the wait list for every available format at each library system. I ended up with the book right away, but then the North Park Live project came up and I wasn't able to even really crack the spine. But then I got the CD version from the county, so both Darren and I were able to listen (though it is 11 discs long and some already had scratches and damage.) At times it was a little hard to follow. Unlike TV, I found I couldn't work or browse or do anything other than clean or walk while listening, but I think the audiobook is the way to go with this novel because they have various voice actors doing each part, including Ann Dowd who plays Aunt Lydia in the HULU series. You can listen to the author do a first read on NPR, and I only hope that now that all you Disney+ diehards got your channel, you get the HULU bundle and can get around to watching The Handmaid's Tale series. I don't really need to do a book review, but the sequel is oddly satisfying.

*
Watch: Last night I stumbled across "I'm With The Band: Nasty Cherry" on Netflix. It's only six short episodes and follows Nasty Cherry, an all girl group assembled by Charli XCX, as they move into a house and try to make a start in the music industry. One of the featured band members is Chloe Chaidez of the band Kitten. In fact, I'd say the reality show series revolves around her dramatic arc with the project. I remember the first time I saw Kitten at the Casbah, lots of School of Rock alum were there to support, so I found them not only immensely talented but quite endearing. When I was a part of DoSD, we had a boat cruise for a beer brand launch, and Kitten was our headlining act. So watching this show, I felt a special fondness for Chloe and it's super easy to buzz through and an interesting take on music today. 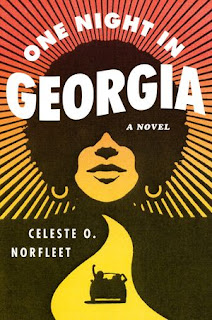 Read: Last week I read One Night In Georgia by Celeste O. Norfleet. I'm gonna be honest, after The Testaments I was looking for something a little lighter, so I read a novel called The Lemon Sisters, but it turned into the sexual modern romance novel. (The "recommended for you" on the library app can't always be trusted.) Gag. But being a person who can't not finish the story, I read it to it's conclusion, and felt icky after for doing so. So then I read One Night in Georgia expecting a nice story with a happy ending. Instead what I got was an intense look at the post-Civil Rights Act but still Greenbook-era south and while it's got some bright moments of joy amongst three college girls returning to school on a roadtrip, there were parts that broke me and made me realize no matter how socially conscious or 'woke' one can try to be, understanding specifically what life is like for African-Americans and the black experience is often just unimaginable.


"I realized that I had wanted to tell my mother that I loved her, too, but I had never said that to her before and she had never said it to me before this moment. It seemed like there was no room for those words in our families. It would mean that we cared, and it was tough to do that when from the very beginning of our time here in America, people of color could be stolen and sold out of our lives on a slave master’s whim."

Still, with all the intensity, I'm glad I read this and definitely recommend it. 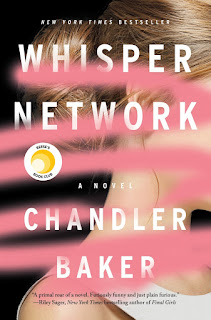 Read: The last thing I'll post here is that I read Whisper Network by Chandler Baker. Again, this one was on the SDPL app, and I read the ebook. That was kind of a problem because I ended up staying all night Friday night reading nearly the whole thing on my phone. It's hard to put down. You can listen to an excerpt of the audiobook here or see her Hello Sunshine blurb here. I worked in advertising in the decade after college and one of my offices literally closed after a sexual harassment lawsuit. In hindsight, that place was exploding with impropriety and we were taught that was "just the culture" but instead we let a lot slide and roll off our backs. I guess the fact that it never really ended is a huge reason why I will live poor as a freelancer as long as I can avoid ever having to work in an office again. There were some amazing quotes in this novel. Here's an excerpt:


"Go take a Midol, Sloane.”
She clenched her teeth, her lower jaw jutting forward into an underbite. She actually was on her period, so this irked her more than it should have. If there was one monthly obligation we dreaded, it wasn’t the backing up of operational databases or the handing in of audit collection sheets or the checking of updates to the management packs—it was our periods. No number of commercials in which women dove into pools wearing white swimsuits could convince us that our periods were a thing of swanlike beauty. On our best days, we maintained a grudging allegiance with our bodies. We knew we shouldn’t be ashamed. We weren’t ashamed. We were grown-ass women—which is obviously why we paraded to the restrooms with tampons secretly stuffed into our cardigan sleeves as though we were spies delivering encrypted information. Other times, we had to fish quarters out of the bottom of our purses, searching for change to feed the feminine hygiene dispensers that had yet to be updated in the past twenty-five years. We took birth control in an attempt to assert a modicum of control over our uncontrollable hormones. We unbuttoned our pants at our desks. We rattled the kitchen Tylenol bottle into our hands. We ate chocolate. We pretended that all of this was a myth. That we had neither fallopian tubes, nor menstrual cycles, nor breasts, nor moods, nor children. And then we took it as a compliment when one of the men in the office told us we had balls. So, tell us again how this wasn’t a man’s world.

This one was basically optioned for a film before it was even published, so maybe that will happen sooner rather than later, though obviously those things can take years, especially if men are the ones pulling the strings.

Anyway, I'm stalling on starting any new books because I seem to be an addictive reader. Once I start, I can't put the thing down, and end up on these wacky sleep schedules that interfere with the rest of my actual life, so I'm gonna put a pin in it for now. Still, if you've got recommendations, please let me know!!