Last night I had the pleasure of joining a group of friends at the Wilco show at Copley Symphony Hall. I'm not sure how my friend procured such killer seats (8th row center) but I don't really care either. It was my first time paying for a concert ticket in a very long time and it was well worth the cost.

I've had the good fortune of seeing the band at least twice before as well as the Jeff Tweedy show at Spreckels, but it was really cool running into so many friends who were seeing the band for the first time.

There were 8 tickets in our group, so before the show we met at Stout where it was happy hour (which is GREAT on a Sunday) and watched the majority of the game. I haven't watched much football this season, but I still think it's a bummer when two East Coast teams go to the big game. SF should've had that.

Anyway, I left the group to catch White Denim open the show. Looking at the Casbah calendar archives, I think the first time I met them was when I was doing merch for Tapes n Tapes (2008), and they've played the Casbah three times since, so I was familiar with their sound. It was a bit boomy on the large stage and it was hard to make out the vocals, but it was still good and I was happy to see the band coming up. It's nice that the good things can happen to the bands who stick around, not just the flash in the pan overnight lo-fi bullshit we're Pitchforked with everyday. 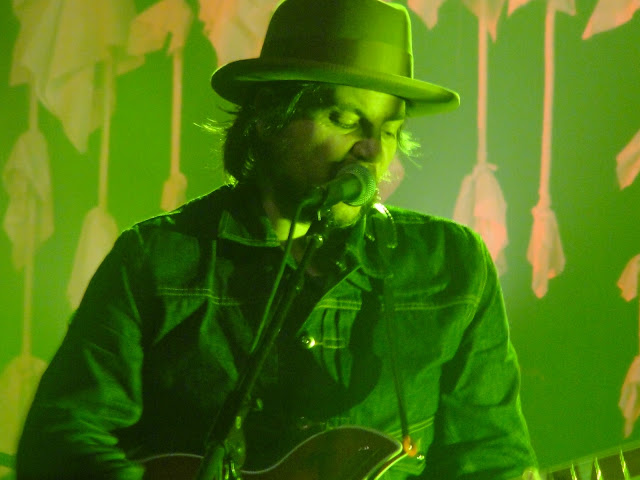 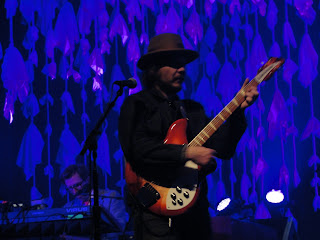 I know I probably should've asked for a photo pass, but honestly it hadn't occurred to me. I just figured photogs would not be allowed, so of course I reverted to high school Rosey and smuggled in my cameras. I was trying to be respectful and mostly just recorded audio for myself (though you can hear two songs that I uploaded to the Casbah's Facebook page).  Here's the other thing and I know I sound lame and old and like a total whiner, but I was really looking forward to a seated show. When Wilco came out and the crowd stood for the majority of the show, I have to say I was pretty disappointed. For one, my favorite Wilco songs and moments are the quieter closed eye moments which are better experienced while seated. For another, I'm 5'3"! I had a great view from my seat as everyone is more or less the same height when seated. When everyone stood, I couldn't see a goddamn thing, especially behind the 5'10" woman in front of me. I was kinda pouting about this, but by the time the band got to California Stars (yes, it took that long...I told you I've been in a funk lately) I was finally in it. 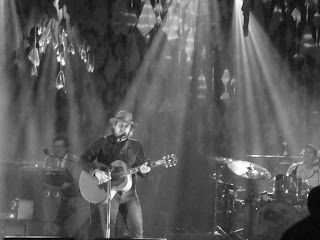 By that time Jeff Tweedy had finally started addressing the crowd and the band seemed to be having a great time. Jeff showed off his history in San Diego by shouting out the Casbah. As an introduction to "Box Full of Letters", Tweedy said, "This song, um, I don't know if we played it the last time we were here. We might not...we might not have played it since the Casbah. Remember that place? Is it still going? " The crowd cheered and some dude in front of me kept yelling, "It's thriving!" They started the song and he stopped it for too much reverb. "That's exactly what it sounded like at the Casbah. One more time. Sorry." After the song, Jeff clarified. "Just to be clear, I wasn't saying that the Casbah sounded bad. Alright? Don't go tweeting that bullshit. I'm just saying that's what we sounded like when we played the Casbah. We have nothing but fond, fond memories of the Casbah. In fact. we're all going there right after the show." 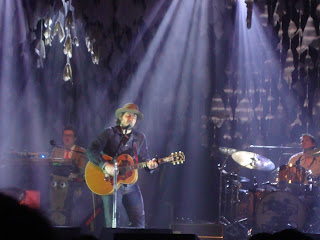 I was sitting next to D.A. Kolodenko (read his funny article about the SD vs SF Burrito War) and after a while he realized I was in my Casbah hoodie and told me I should give it to Jeff. The thought had already crossed my mind, so after the band's last song of the set, "Shot In The Arm" I made my way up front where Erik & Jessica and their friends had seats and I chucked my Casbah hoodie onto the stage. After the band left the stage, a tech picked it up and when the band returned to the stage, Jeff was carrying the hoodie like a flag, then asked if I wanted it back and I shook my head, that it was for him, and  at one point he tied it around his waist and then he tried putting it on the bass drum, though it fell off as soon as Glenn started playing. Tweedy again commented on the Casbah. "You know what would be really embarrassing? If it turns out that we've never played the Casbah. Now I'm starting to have my doubts. I think it was Uncle Tupelo. Well, it was fun while it lasted." Indeed, it was Uncle Tupelo.

The show was great and I want to give super massive thanks to Sean for getting the tickets, to Mocha Joe for the ride to and from the show, to D.A. for putting me up to chucking my hoodie, and to Justin Q for grabbing me a setlist. I heard at the end of the night that some usher had my hoodie though I hope somehow, some way, it got back to Jeff.

p.s. My shots are taken from 8 rows back with point and shoot Sony Cybershots. Owl & Bear had a photo pass so keep an eye out for some real pics of the show.
Posted by Rosemary Bystrak at Monday, January 23, 2012

Awesome show report Rosey, I wish we could have got tix to the SD show, its always great to run into friends when I'm high on seeing my favorite bands. Adam and I got yelled at by the guy behind us for standing during the encore at the show at ASU on Saturday night. I would have felt bad except we had sat for the the whole show up to that point, and about 50% of our section was also standing, including the rows in front of us.