Tuesday Night: Niki & The Dove at the Casbah

[This is written by Kristian Zaspel, my bestie from back in the day who you know as a bartender at URBN, Seven Grand, being a social media baller at My SMN, or from pictures from his recent Turista Libre birthday party, but regardless, Kristian is one of those guys that I trust and respect when it comes to his music opinion. He couldn't remember his login and even though I sent him a new one, he's too busy being a dad and running the world to get on here and post for you. So here it is. Niki & The Dove. -rosemary] 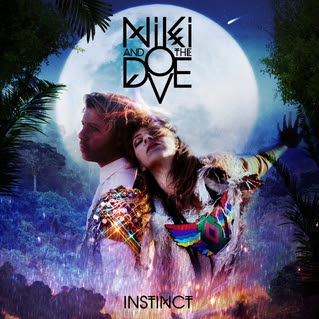 One would think that Niki & The Dove are aliens from an intergalactic, funktified planet far, far away, but they're actually just from Sweden. In the electronic music world though, Sweden is about the closest thing we have to another planet. Acts such as The Knife, Little Dragon, Miike Snow, Lykke Li and Robyn have been churning out metaphysical jams effortlessly on the regular. So much so that I wouldn't be surprised if Sweden's number one export changed from machinery and motor vehicles to catchy hooks and funky beats.

Malin Dahlström (vocals) and Gustaf Karlöf (production) started creating music together in Feb 2010 and haven't looked back. Niki & The Dove recently won the 2013 European Border Breakers Award (honor to best new music acts in Europe) and their music has been getting comparisons to Prince, Fleetwood Mac, Cindy Lauper and trashy Europop. Hell, even snotty, uber hipster, tastemakers Pitchfork.com even like their album: http://pitchfork.com/reviews/albums/16758-instinct/

Fortunately for us, Niki & The Dove will be bringing their other worldly, dancefloor beats to The Casbah tomorrow at 8:30pm for only $15. I guarantee this will be the last time they play a venue this small for that price. Added bonus, Vacationer is opening and while they're only from Philadelphia, they're still pretty damn good.

Email ThisBlogThis!Share to TwitterShare to FacebookShare to Pinterest
Labels: niki and the dove