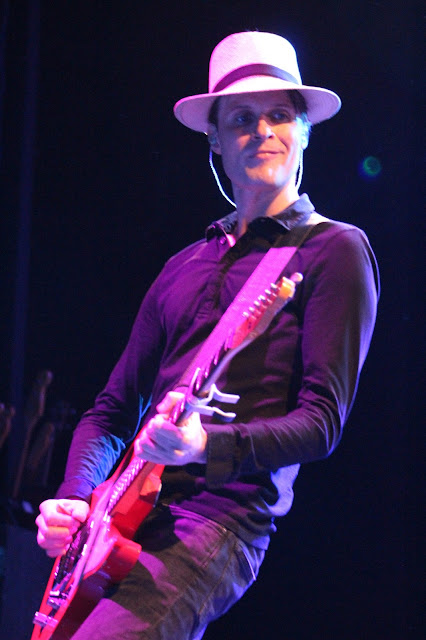 It was a pretty insane week around these parts for sure. Nova turned 11 on Tuesday, so we had a little family get together at my parents' house. On Wednesday, I was able to go to the Arctic Monkeys show which had a strict no photo policy, so I wasn't going to take any chances, even though lots of other people did and Alex Turner seems to mug all over the stage intentionally. Dude is probably the sexiest guy in music today. After the show I went to see Lo Moon at the Casbah, who sounded great and had the best lighting the Casbah has seen in some time. On Thursday night, I scored another pair of tickets to Arctic Monkeys and Darren was able to join me for the show. Afterward we hit the Casbah for King Tuffy which was a ton of fun, and then I closed the night at the Ken Club though Darren had to call it. On Friday, I shot photos at the Observatory for The Fratellis and Blood Red Shoes but decided to call it a night after the show.

On Saturday, after Nova's derby and soccer, we attempted going to Old Town but so did everyone else in the world, so we turned the car around, parked at home, and instead went to Viva North Park and dinner at El Comal, before I had to get to the Observatory to shoot Matt Maeson and Bishop Briggs. After that, I headed to Casbah and got there in time for Sveth Ulvang and Wild Child, then closed the night at the Ken Club. On Sunday we rethought our plan to Old Town and this time took the Rapid 215 downtown to the trolley to Old Town. It was actually a pretty lovely day, and I don't really care about all the people who mock Cinco De Mayo as an American excuse to drink, the reality is that in this time and political climate, anything that celebrates Mexico and Mexican Culture--and trust me, the place was packed with us--is fine by me, and it kinda made me beam a little with pride to think of where my grandparents came from and what they went through to get here. Incidentally, the bus and trolley combined take over an hour to get someplace we can drive in less than 12 minutes, but it was a fun part of the adventure for us and we had no real time constraints.

Sunday and Monday were chill nights at home working and binge watching, but I'm looking forward to a ton of shows this week, including Rogue Wave, Frenship, and Nada Surf, and a bunch of shows I'm still holding out for like Built to Spill & Afghan Whigs, Hot Snakes, and Franz Ferdinand, not to mention finally throwing Nova a proper birthday party and maybe checking out the North Park Festival of the Arts, too. Listings for the week are after the jump.