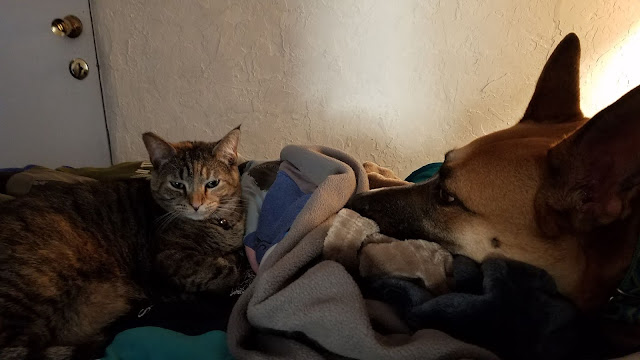 I had an eventful non-eventful week. It's kind of embarrassing how little I get out of my house when I don't really have to. We did end up driving to the snow on Tuesday, but it was actually too much coming down so we had to book it before the roads froze to ice. We have chains but they're hard to actually put on once the snow is falling and that wind gets blowing. We thought about going back on Wednesday, but I was too upset about the guy who died on the Pine Valley Creek Bridge. On Thursday, Nova had her school spelling bee, and we were super proud of her dedication to memorizing that crazy Scripps word list the best she could in five days. She finished in the top 10 of her school. On Friday, I went to the Alex Cameron show then closed the night at the Ken Club. Saturday I mostly had the day to myself while Darren worked and Nova was off at a hangout/sleepover. With all that time alone at home, you'd think I'd have finished using the KonMari method on my house but it was kinda nice to catch up on some shows, get into a couple new books, and stay lazy and cozy. On Sunday the Casbah staff went to the new location of Grand Ole BBQ & Asado in Flinn Springs which is an awesome spot and stayed packed with people the whole time we were there. It's definitely worth the drive if you wanna make a couple hours of it on a weekend or late afternoon. Then, as I previously mentioned, I watched the entire GRAMMYs telecast. This week, you can find me at Broncho, and then I'll be working at the Irenic for The Marias and Pedro The Lion. I might try and catch some Cancelled Fest, Louis XIV, and Ron Gallo, but it will hinge on how the work week slays me. Listings through Tuesday are after the jump (since Monday is a holiday).