I'm working on this week's listings but thought I'd share some more links before I really dig in. 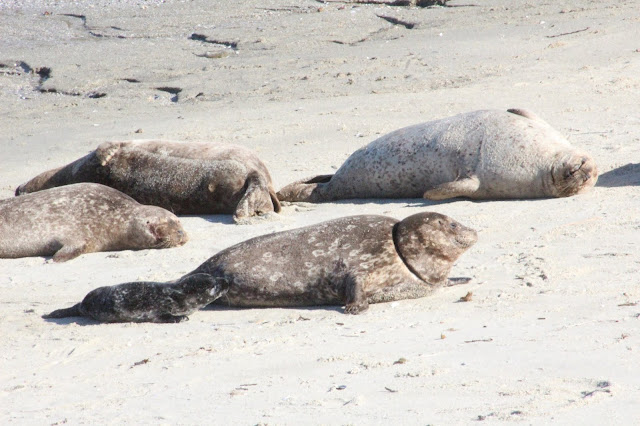 First of all, it's pupping season at Casa Beach! I wasn't supportive of the new lifeguard tower at the beach, but I'm here to say I was wrong. It's actually awesome, because now the lifeguards are on an intercom and call out tourists and looky-loos when they're getting too close to the harbor seals. It's actually fantastic and there are at least half a dozen pups already born. I also read that there are a couple caught in fishing line or nets, but Sea World can't quite help them yet because they risk flushing the beach if they try to intervene. I hope this momma gets her neck freed soon. My advice, bring your camera and stay away on weekends. On to the reading after the jump.

This article about school shooters makes my head explode. The gender and race neutrality of the article makes it so insane. This is almost always a white boy problem. School Shooters: What's Their Path To Violence?

Nova's mom hasn't been involved in her schooling at all in a few years, but suddenly was interested in who her PE teacher is and asking the principal's name when Nova told her they did yoga due to the rain. So this is an old article but at least gave us some lolz. Georgia Parents Confuse Yoga For Anti-Christian Propaganda, Fight To Get It Out Of School. The same thing happened locally a few years back. I.can't.even.

The Hustle has some of the most interesting mini deep dives on political, economic, and tech info and you should definitely subscribe to their newsletter. This article particularly speaks to me. The shady economics of ‘buy one, get one free’ deals.

This story about a 6th grader who stood up for himself at school makes me crazy. It bothers me that is was a Cuban degrading a black student--I'm embarrassed that such things occur between people of color, who should be on the same team with regard to discrimination and marginalization. His academy/district do not require the pledge. The teacher won't be able to work in the district again because of this situation. Yet, the boy was still arrested and suspended because of his reaction to the school resource officer EVEN THOUGH HE WAS FUCKING RIGHT. I'm hoping to follow and hear of a reversal and an apology from the school and district. A Florida boy was arrested after refusing to recite the Pledge of Allegiance in class

And, since it's not all bad news, this was a funny thing I saw today. I'm neither a Star Wars fan nor have I seen A Star Is Born (which is out on DVD today), but that made me smile.


As for my watchlist, we're still in our full Game of Thrones rewatch, timed with LA Daily to watch an episode a day which will lead right until the premiere of the final season. Plus RHOBH is back and RHONY is coming soon, too. I might even refer to GoT as Real Housewives of Westeros the way things are going. I'm just here for the drama.
Posted by Rosemary Bystrak at Tuesday, February 19, 2019