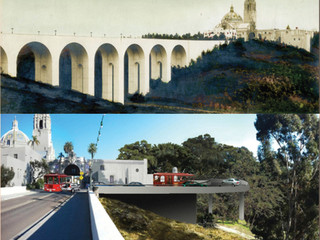 Last night I got all fired up about the proposed "Panama Project" at Balboa Park. I feel tragically uneducated about the issue and mostly just feel like the park should be left alone. The reality is that isn't going to happen, especially as the city gears up for 2015's centennial celebration of San Diego's 1915 Panama-California Exhibition. So I'm gonna back off a little bit and just share some links from both sides if you choose to read up on the project. Obviously there are dozens of links to articles and such, but here's just a small roundup.

The final City Council hearing is Monday at 2pm.

(Update: Kelly Bennett at Voice of San Diego did a great primer. Check out "Understanding the Plans for Balboa Park")

Save Our Heritage Organisation

Opinion: Jacobs Plan for Balboa Park Not Worth It

Opinion 'So Much More' to Jacobs' Balboa Park Plan

Opinion: Balboa Park Could Be Even Greater if Jacobs Plan Implemented