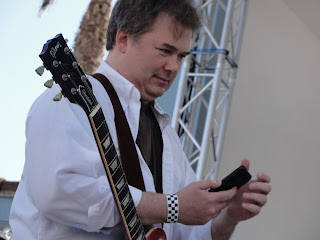 After the announcement a couple weeks back that 10 year Program Director, Garett Michaels, was no longer with FM 94/9, I told you that I'd update you as more information became available. Some other changes have gone down at the station as Kevin Callahan, who also programs KSON-FM, has stepped into his role (read more at CityBeat), so I thought I'd recap some of what's been going on over there.

The most obvious changes have been in the reductions of the station's specialty shows. Big Sonic Chill and FTP have both been cut, with The Local Pyle extending to three hours and shifting from 8-10pm to 9pm-midnight on Sundays. Also on Sundays, Brunch With Bob, which ran until noon on Sundays was shifted to an earlier Sunday morning slot, which resulted in host Tommy Hough deciding to end his run at the station- basically he felt that "Brunch" ending at 10am wasn't the best move for the show. (You can read the whole press release after the jump.)  Additionally the station has just announced Commercial Free Mondays (starting today).

In slightly less obvious changes, it appears the station's playlist is being tweaked to include even more tried and true 90s alternative tracks. You can look over recently played tracks and see some familiar names getting back in the mix. Naturally, changes at any station make insiders rumble or get uneasy about the future of the station, but I'll skip any speculation and just say that I'm really looking forward to Independence Jam on September 16 and believe that the best way to support a station is to tune in, call in, leave comments, visit their sponsors, and let them know you're listening, (even if you don't have a Portable People Meter to help bolster their ratings) and buy tickets to the show!!

In related news, it appears that Mikey has resurfaced with a long overdue message to his listeners after a stint at an in-patient facility. You can read his full message here or on his Facebook page (which after being posted on Friday has over 400 comments).

Brunch With Bob and Friends Ends Run at FM 94/9

After an eight-year run at KBZT FM 94/9 in San Diego, Brunch With Bob and Friends has opted to part ways with FM 94/9, and is seeking a new radio flagship station.

The move by producer and host Tommy Hough to pull the show from FM 94/9's Sunday morning line-up was precipitated by a decision made by FM 94/9 management to alter the show’s time slot.

Since 2004, Brunch With Bob and Friends has run until 12:00 noon on Sundays. The new schedule would have had the show ending at 10:00 am, a move which Tommy felt would not have been in the show’s best interest, and not in the interest of long-time listeners who have made the show a part of their late-Sunday morning routine over the last eight years.

Tommy said, "I wholly respect the fact FM 94/9 wants to make changes, and I want to thank the station for being the radio home for Brunch With Bob and Friends for the show's first eight years. I’m looking forward to when I can announce the show’s next radio home in San Diego."

Tommy went on to say, "The most important factor for me is making sure this show is available at a time which not only lives up to the show’s name, but is on at an hour which the Brunch With Bob and Friends community has grown accustomed to. I want to thank the listeners for their support during this time of transition."

In addition to the http://www.brunchwithbob.com website, listeners and fans can also stay connected to Brunch With Bob and Friends via the show's Facebook and Twitter social media accounts.
Posted by Rosemary Bystrak at Monday, July 02, 2012

Email ThisBlogThis!Share to TwitterShare to FacebookShare to Pinterest
Labels: FM 94/9

Adam Calhoun said...
This comment has been removed by a blog administrator.
9:23 AM