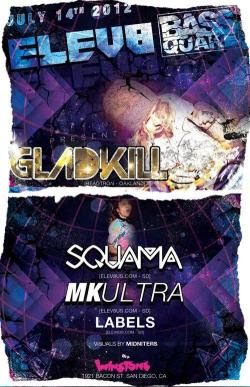 Comic-Con weekend brings many attractions and new artistic medium debuts to our fair city, and ELEV8 wants you to celebrate Comic-Con with Gladkill making his San Diego debut along with a great lineup this Saturday at Winstons in Ocean Beach.  Gladkill has already proved himself as a great producer by playing some of the countries biggest festivals including Coachella, Lighting in a bottle and burning man.  Gladkill is part of the music collective Headtron, which includes other great artists like Stephan Jacobs, Gold Rush and Sugarpill.  Gladkill has great melodic lines and live he will bring smashing club banger.  Also on the bill is are some great local artists including Squama MKUltra, and Labels.  Squama, who is a good lead in playing some great future bass and glitch.  Squama has already made a name for himself playing with greats including Nero, Chase & Status,The Gaslamp Killer, Freddy Todd, 12th Planet, Kastle and many others.

If you are feeling ambitious and want to check out two shows, or cant make it to Ocean Beach then make sure to head to The Kava Lounge for Dragon Lounge with headliner Ruff Hauser, more info after the break. 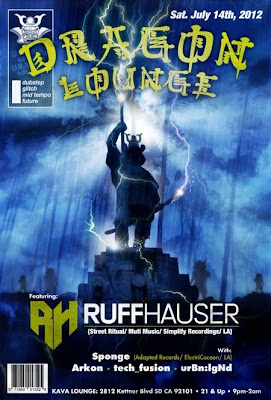 Ruff Hauser has been a mainstay in the underground scene mixing for 16 years and producing for 10.  Ruff Hauser has developed a style of his own by fusing elements of Dubstep, glitch hop, 2-step, and minimal techno into one beautifully orchestrated arsenal of dance floor bangers.  His live sets breed genres using drum machines, fx processors, and digital sound manipulators creating a unique blend of audio art. Ruff is well respected in the LA underground community and like Gladkill has played huge music festivals including Coachella, Lightning in a Bottle and Burning Man.  Also on the bill are Sponge, Arkon, teck_fusion and the always amazing urBn:LgNd.  If you do make it to Kava Lounge make sure to get there before nine to see urBn:LgNd as her sets keep progressing and evolving making her a great San Diego underground artist.