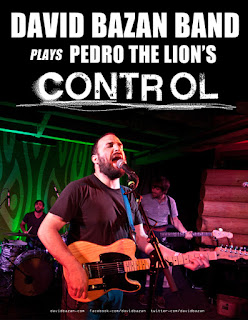 Back in my “Christian Rock is the only rock” days, I had a particular fondness for the Christian ska band Five Iron Frenzy. I actually still do, but that’s another story. Anyways, I always loved reading the liner notes of every CD of theirs and they always thanked the band Pedro the Lion. I never made any effort to seek out this band for a while and, by the time I did, Pedro the Lion was long gone. All that remained was David Bazan and that has been more than fine.

Tomorrow night, if you were so lucky to get tickets to the sold out show at the Casbah, David Bazan will be playing Pedro the Lion’s classic album “Control” in its entirety in celebration of its 10 year anniversary. David Bazan has come through San Diego many times in the past few years and has played some wonderful shows with various themes. He has played intimate acoustic sets in living rooms and brought searing jams to the Casbah. All the while playing songs from the prolific songwriter’s back catalog. But tomorrow night, it will be all “Control” and I can barely contain my excitement.

For a taste, check out David Bazan playing “Magazine” at the Casbah three years ago (which, coincidentally, was my first time seeing a show at my favorite venue). Tickets are sold out and Stagnant Pools is opening.