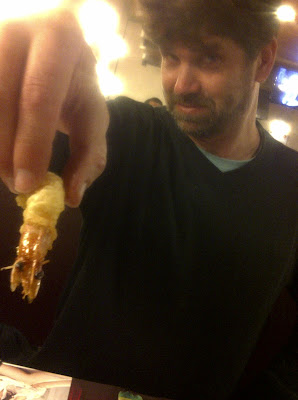 I've been writing online in one form or another since about 1997, and over the years I've battled with this theory that it is good to write personal stories, but to learn how to separate that from the private not-for-sharing stuff. I really have few filters, but when it comes to my relationships, it is challenging because while I want to share my joy, I have to be super-sensitive to the object of my affections not give them a life in public that they don't want. Thankfully Darren is a really good sport. Though my diaries and social check-ins often miss large gaps of time when you probably just assume I'm sleeping,  we are fortunate that we get to spend a lot of time together everyday. Still, because of work and family obligations between the two of us, there is only one night every two weeks where Darren and I get to have what I've referred to as our #24HourDate nights.

Wednesday was Darren's birthday and after my amazing birthday with him back in September after only dating a short while, I felt some pressure to make his epic, especially with (or in spite of) his reluctance to even acknowledge the occasion. So we just went with an upgraded #24HourDate. If you wanna hear about it, keep on reading after the jump.

I was up really late on Tuesday night working and writing and baking his special lemon cheesecake bars. I finally went to sleep around 6 am. We planned on early morning river cleanup with the River Rescue A-Team, but he had to run some morning errands and when he arrived around 10, we concluded it was a little too late to try and meet up with the 9am cleanup crew. Instead, I made him breakfast and hung out for awhile before we had to part for our Wednesday obligations, which for me means a Casbah meeting and usually errands and lunch with Pyles and for him means volunteering as a PE coach at Nova's school. By the time we reconvened around 4pm, I was super excited for whatever the night might bring. 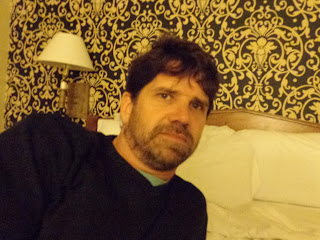 We started out on our bikes, riding to the Lafayette Hotel to check in. I had a room credit and thought it would be a good day to use it since I received a neighborhood notice that my water would be shut off on Thursday from 8am-5pm. Even though the hotel is only about a mile from our apartments, it can be really fun to just escape our cluttered living spaces. Our room was huge and it was beautiful to just lay on the bed and talk without any obligations or distractions. It doesn't happen often that I'm not on my laptop, tablet, phone, and watching TV simultaneously, so to be untethered was refreshing. When we finally worked out plans, it was really hard to leave the room to rejoin the world.

What we decided was that we'd ride bikes to McKinley Elementary where there was a public meeting about the conversion of school property to a joint-use park. We don't live in the immediate neighborhood, but for a number of reasons, found the meeting interesting. For one, there are dozens of schools that have created or will create joint-use space, and so many face the same funding issues, neighborhood demands, and NIMBY attitudes. Since I had some experience working at an architecture firm that built new schools and modernized old ones, it was also interesting to see the various proposals based on the feedback they received after their first public meeting. Just as community residents who frequent parks or find ourselves hunting for bathrooms/water fountains when we ride bikes, we also had to put in our two cents advocating facilities. Anyway, one of the many things I love about Darren is how passionately opionionated he is about public schools, city politics, parks, transit and the like. We left as the debate stagnated and laughed at how we were neighborhood poseurs, mocking the lady who actually said, "well, how do we control the park so WE can all use it but keep out people we don't want in the park?" <begin exit music> 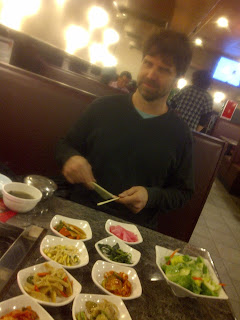 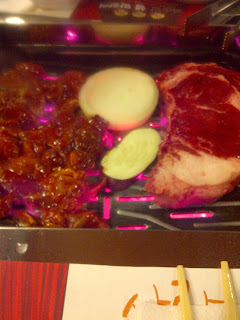 We rode bikes back to the hood, stopping at Fresh And Easy to grab snacks and beer for the room. We rode to my house to take care of Pascha, and ditched the bikes for Darren's car. There were so many things we could've done, the city was wide open, but we had gotten it in our heads that we wanted to try this new Korean BBQ place on Convoy. We had no idea what to expect except that about a month ago we passed by and it smelled heavenly. Roadem BBQ was absolutely amazing. We ordered off the $24.99 all you can eat menu, because if you're going to go, you can't not try the rib eye. We also ordered the spicy chicken. Each table is equipped with an infrared grill and an exhaust hood. Upon ordering, you're immediately supplied with your raw meat on the grill and an assortment of about 12 different little dishes including things like a green salad, potato salad, kimchi, fish skin salad, squid, asparagus, steamed egg, tempura vegetables and shrimp, seaweed soup and more. 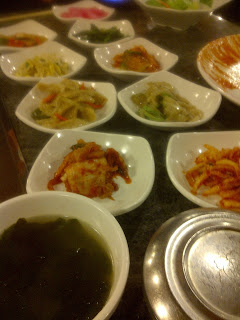 Once the steak was ready to flip, the hostess returned with kitchen shears and cut the steak into bite sized pieces that only required a quick sear. The food was amazing, and though not cheap, is definitely worth the trip if you're looking for something delicious and different and aren't afraid to eat some serious food. They have coffee to go, so after lingering a while, we headed back to my house to grab our chilled beer, overnight clothes, and returned to the hotel.

At that point in the night, it was already about 10:45. We considered the Casbah or Soda Bar, but I wasn't sure Califone would be Darren's kinda band, and we found out Soda Bar's lineup started early so it was already almost over. With that, we had a beer in the room, went to Livewire for a little while before shutting down the night back at the hotel. 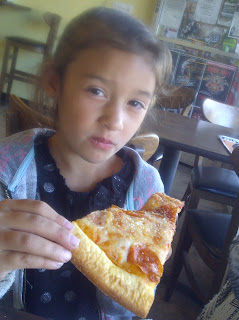 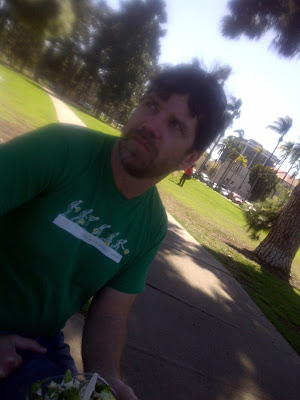 We checked out at noon, returned home to a dog very happy for a walk, then went to Marketplace in Banker's Hill to grab a sandwich and salad and concluded #24HourDate with a picnic in Balboa Park. Needless to say, it was pretty amazing day and night all around. 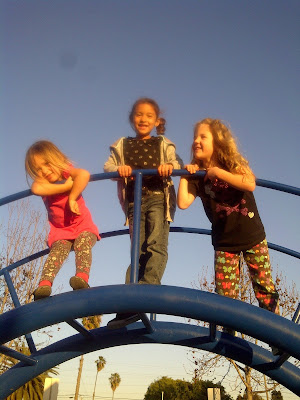 After Darren and I parted, I was working at home when my sister called. She wanted to hang out, so I went with her and the girls to Sicilian Thing where they devoured their slices, visited Kristian at MySMN, went down to Staples to get my new Google Nexus, then went to North Park Community Park to meet back up with Darren and Nova. The girls played together in the park until well past sunset, and by the time I was home, I was beat. I wasn't feeling especially well after the idiotic decision to have a McDonald's McDouble for dinner, so I ended up skipping SoundDiego Live at U-31. Unfortunately that means I fell asleep around 8 and woke up around 1am and never got back to sleep. Fortunately I had a lot of work to keep me occupied until Darren arrived in the morning. We had a nice morning then met Kristian for lunch at DaoFu (formerly Tao) in Normal Heights, rode bikes to Adams Avenue Rec Center for some table tennis, then to Kensington to get his van. We went grocery shopping and I let my Sequester paranoia set in and decided to stock the freezer with meat and poultry because prices are expected to spike quickly. Darren took off to work and I zonked out until Jeff picked me up to go to the Belly Up for Ryan Bingham and HoneyHoney. The show was great though we left a little early so I could also catch Redd Kross at the Casbah.

Today was a slow starting day, but after making breakfast, Darren and I went for a meandering bike ride through Normal Heights and Hillcrest and eventually rode over to the First United Universalist Church by the UCSD Medical Center for a MoveOn.org promoted Call to Action Against Gun Violence that had some really interesting speakers, especially Kimberley Beatty of Poway Unified School District. She used to be an ATF special agent and also a lawyer, so she had some pretty incredible statistics and historical perspective about guns, ammunition, and the NRA. Bob Filner was late arriving, so we couldn't stick around to hear him speak, but now I'm home and pretty impressed the CBS and NBC both had news teasers about the event.

Anyway, I didn't really mean to stay home tonight, but sometimes time just slips away and it's just a little too late for me to motivate to head out, but I'll be back to it tomorrow for Surfer Blood at the Casbah. Here's to hoping the weather forecast for tomorrow is wrong. -xoxo, rb
Posted by Rosemary Bystrak at Saturday, March 02, 2013