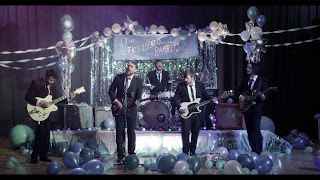 Having just watched a live in studio performance on KCRW.com from our favorite Scottish lads, Frightened Rabbit, I felt compelled to urge those who are unfamiliar with the band to find out what you have been missing. Having just released their fourth studio album, Pedestrian Verse, it is readily apparent the band has renewed itself once again. Scott Hutchinson (lead singer) revealed a different process was used for this album. All the band members shared in the writing and the result is their most complete album to date. A sixth member will be seen during the upcoming tour, which finds its way to Solana Beach next Tuesday, en route to the annual music conference in Austin (SXSW).

Frightened Rabbit delivers passionate, uplifting performances each night. I have lost count of the number of times they have played here, suffice to say I never tire of seeing them perform. Expect to hear many songs from the new album plus some favorites from the past. Hopefully this tour will enable them to grow their audience, for I cannot think of a harder working band more deserving.

Be sure to catch Frightened Rabbit at the Belly Up next Tuesday March 12. Fellow country mates The Twilight Sad set the stage. This is a Casbah Presents 21+ show.Tickets can be purchased here.

Watch a video of The Woodpile below.
Posted by Jeff S at Thursday, March 07, 2013