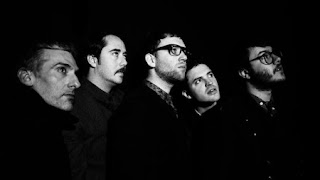 Brooklyn five piece indie rockers Caveman continue their stateside trek here in San Diego this Friday. This is four days before Fat Possum releases the bands eponymous sophomore record. The label has teased us with advancing a couple of tracks on the forthcoming album. If this is a pretense of the entire work, then all signs are pointing upward as the band continues to expand its sound. At the center is lead singer Matthew Iwanusa , whose voice is so readily likable one cannot help but become somewhat transfixed on the overall effort. I was in the crowd the last time Caveman played the iconic Middletown venue, but this show promises to be even better while showcasing the band's growth. Do yourself a favor and kick off the weekend with an intimate show featuring a true up and coming band at the Casbah. Tickets can be purchased here.

Listen to Over My Head and In The City (via SoundCloud) from the yet to be released Caveman below.