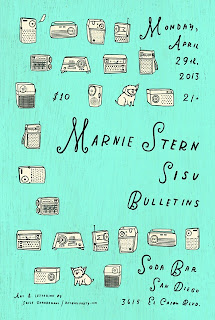 Bassist/vocalist Lorelei Plotczyk (Film School) fronts newly formed San Diego based band Bulletins. Keyboardist/vocalist Susie Ghahremani, guitarist/vocalist Itai Faierman (The Mashtis) and drummer Luis Galvan are the other members of the group. Referencing many bands as being influential in their sound, the music is mainly of the dream pop genre. The band is playing their first San Diego show as openers for Marnie Stern at Soda Bar on Monday April 29. After listening to the songs posted below (courtesy SoundCloud), I think you will be motivated to head out for a night of great music.

The opportunity to see Bulletins perform on a much bigger stage comes on May 18 when the band plays the North Park Festival of Arts. (http://northparkfestivalofarts.com/)

thank you so much!!