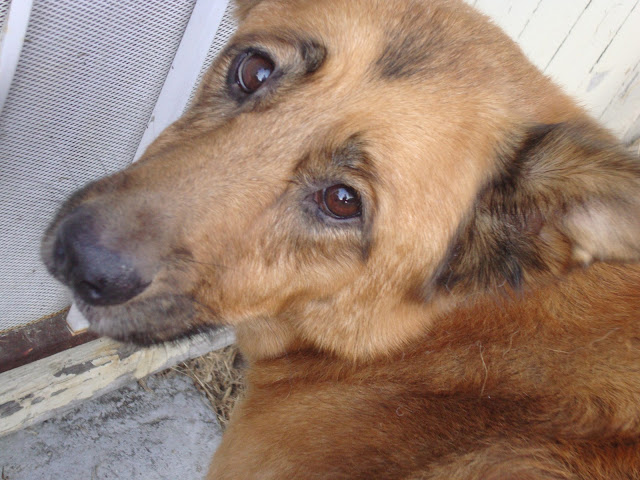 Earlier this week I mentioned that October is a month of anniversaries but there are few more special than the fact that on this day in 1999, I walked into the old San Diego County Animal Shelter on Gaines Street and was adopted by my dog, Pascha. They have extended hours on Tuesdays, and I had been going to every Tuesday for a few weeks just waiting for a dog to ask me to take her home. I thought I was looking for a pug or a beagle or a little Boston Terrier (all of which are almost never up for adoption). This was before the amazing renovations to the facility. It was actually quite a sad sight, with way too many dogs and a small canal of waste ran in front of the kennels. I always made a point to greet every single dog along the way, even if they'd bark in my face, you can pretty much always calm them down and pet them. So I did my ritual petting of every dog and got to the very last kennel. There were four dogs eagerly barking and tail wagging and then out from the back, this shivering mutt looks at me and slightly raised her eyebrow. Do dogs have eyebrows? Whatever, you get the point. I was already in love. She had to be carried to the yard for visitation because she was so terrified, and she peed all over the Animal Control person. She was pretty much completely uninterested in me until the very end where she made a feeble attempt to retrieve a tennis ball and came over and sat near me. "That's the most interaction she has ever displayed!". The lady told me that they pretty much figured she was unadoptable so if I wanted her, I'd have to wait a day so they could fix her. On October 6, I brought Pascha home, much to the dismay of Kiwi, who pretty much sprung three feet straight up from the ground when they met.

In my life, I've had several pets. We had Iggy, the German Shepherd when I was little, then had P.A. (short for Party Animal, a family joke probably taken from "Alf") and Sugar, our half beagle/half bassett hound who finally passed a couple years ago after , our family dogs. I've had cats, too, first there was Sydney, then Kiwi and Monkey and Boo Radley. Kiwi still remains. All of these animals were either from the shelter, or were shelter-bound. There is something about owning a pet that just makes you a better person. A little bit softer, a little less selfish, a little bit kinder. Pascha has my heart in ways only other dog people can understand.

This month is Adopt An Animal Shelter Dog month and so I thought I'd share and tell you that if you have room in your home and room in your heart, let a mutt choose you and your life will never be the same. For local information, go to the San Diego Department of Animal Control site for a list of all county and city shelters. They usually have discounts for adopting older pets and they give information on low-cost vets, too.
Posted by Rosemary Bystrak at Friday, October 05, 2012