Rosey's Diary: I Gotta Say It Was A Good Day

I got home a bit earlier than usual tonight so I thought I'd recount the weekend instead of waiting a couple weeks and trying to go through all the good stuff in one go. Plus it's raining outside and judging by the level of intoxication I witnessed tonight, Darren is probably going to be working pretty late tonight taxiing half of San Diego home. Also, judging by the number of my friends who asked about my crutches, apparently none of them actually read my blog anyway, so I can pretty much say whatever the hell I want without filters. Except you, Mom. I know you're reading. Don't mind the thing about the boobs. 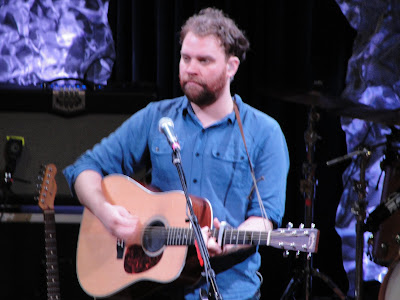 So I guess I'll start with Friday. After having a lovely sushi dinner at Ichiban in Hillcrest, we did some shopping before D headed to work and I kicked around the house until it was time to head to the Casbah. I was pretty nervous because I was filming my very first on-camera interview with Bowerbirds for SoundDiego TV. I've been on the SoundDiego team since the beginning, and since the TV show launched, I've been asked if I want to do interviews. I was on camera regularly in high school for our Daily Bulletins, but haven't done much since then, I really don't even interview people for this site. It's just not in my wheelhouse, I guess. I suppose it went okay, Josh and Beth of the Bowerbirds were incredibly easy to talk to, both off camera and on, but it still had me pretty anxious, especially toward the end when Strand of Oaks started soundchecking and I started talking really really fast to try and wrap it up. It will air on the show either next week (when I'm in Puerto Vallarta) or the following week, so you can let me know how I did. As for the show, both bands were great, though I went from 0 to 60 pretty quick and let's just say I am lucky to have safe rides home.

Even after an overindulgent night, I was still up pretty early (for me) this morning, and made breakfast and hung out enjoying the sound of a brief rain while Darren caught up on Sportscenter. Bored of that, we ended up watching a couple hours of the local government channel. I know we're total dorks, but I love that aspect of our relationship...chatting about local government and our city council and issues that affect us every day. Darren suggested we make an MST3K but for our City Council meetings because our commentary gets pretty hilarious. Eventually we motivated and headed to Rocktoberfest. As the Casbah publicist, I was responsible for the press list and had to be on site a bit early. Fortunately we arrived just in time to hear Mariachi El Bronx during their soundcheck. They're just really amazing and were it not for Frightened Rabbit, I certainly would've stayed to see them. As for the press list, I do have to call out the guy who tried to tell the girls at the desk that he needed FOUR press passes for him and his THREE assistants. I'm pretty easy, but even the SoundDiego film crew don't use four people. I mean, seriously?

Anyway, gates opened at three but I just really wanted a Coke, so we went to West Coast Tavern and ended up eating some wings and flatbread before D started work and I returned to Rocktoberfest. I was able to stay long enough to see New Mexico, Family Wagon, and part of Grand Tarantula before going to work at the Irenic. Frightened Rabbit is one of my favorite bands, I was trying to remember how many times I've seen them live and I think I can recount 7 shows, but there may be more. So of course it was especially awesome to hear them soundcheck in a church with just a couple people in the room. It was also cool because the show sold out over a month ago and for whatever reason, the majority of people actually had tickets delivered via USPS instead of will call, which means I actually got to watch (and film) most of Frightened Rabbit's set. They played an hour and a half set which was pretty awesome, and once the show ended, Chase dropped me off at the Livewire 20th Anniversary show at the Lafayette Hotel.

So maybe I was being a little snarky about the crutches/not reading my blog. Really what I should say is that it is a pretty amazing feeling to have so many friends who cared to ask what happened. I tried to say hi to everyone I saw, but everywhere I looked, there were amazing friends from the last 20 years that I didn't even get to say hi to everyone. I saw Josh, a guy I don't think I've seen since we dated when I was in junior college, friends that I hung out with at shows back in high school, and friends I've met in the music scene over the years. The thing that became so stunningly clear is how amazing the music community is in this city. I mean, I think about when I was in my early twenties and Livewire was my semi-regular hangout and my girlfriends and I would sorta gawk at all the cool kids, and over the years, they've become my friends, colleagues, bosses, what have you. I mean to get such a giant bear hug from Mitch right before No Knife played their second set, or chatting with Rob Crow as some 37 year old guy came up and gushed that Rob was one of his musical idols and he's wanted to meet him since he was 15, or even the fact that I could text Sam on the day of the sold out show and he still was kind enough to hook me up with a wristband. Pretty awesome.

There were also funny moments at the Lafayette...apparently the crutches make my boobs scream "hey drunk friend, have you touched me lately? why don't you go ahead an cop a major feel? definitely use both hands and go on and just give yourself a couple good squeezes." I wasn't drinking at all today or tonight, so it was just funny to see everyone else having such a great time, and needless to say, aMiniature and No Knife were just phenomenal. When I got home, I sent a tweet saying, "Don't ever take this city for granted. We have an AMAZING music scene and even more AMAZING music community. Congrats to Livewire! #LW20", but I want to qualify that. The music community is only as amazing as we make it...by participating, by showing up to shows, by spreading the love, by spending our money at local businesses. Every single day I post listings here with all of the music happening around town. Yes, some cost money, but there are plenty of free things, too, and even though I emphasize the more indie-rock type things, doesn't mean there isn't something for everyone on a daily basis. You just gotta do it.

After the show I know that Livewire was filled to the brim and Robin and Candice were telling me there were some hotel afterparties and such, but my leg was telling me it was time to come home, plus who wants a sober girl at an afterparty? Pyles dropped me home where Pascha was dutifully waiting for me with no messy surprises despite being cooped up inside for 11 hours. Such a great dog. It's now 3 am and my Frightened Rabbit videos are uploading to YouTube, so I'll get those up here sometime tomorrow or Monday.

I feel so lucky to have been born and raised in San Diego. What an amazing place to live.

One other side thing if you're still reading...I forgot to thank everyone for the "honorable mention" for best local music blog in the CityBeat readers poll. To be completely honest, I didn't even know SD:Dialed In was nominated (or I probably would've made a really big deal out of it). Congratulations to Owl & Bear who are so deserving of the title, and I'm proud to be on the SoundDiego team which also got an honorable mention.

What an amazing show. We were lucky to grow up here and witness such awesome bands. That was the first time I saw aMiniture and they blew my frickin' mind grapes all over the place. No Knife were true showmen and when they played Boilermaker I freaked out. Then they followed it up with Inch! Whhaaaaatttt?!!!! And then after that, aMiniature and noKnife were both coming back on?! Awesome!! One of the best shows I've ever seen. The atmosphere in the place was unreal. It seemed like everyone was as stoked as I was!